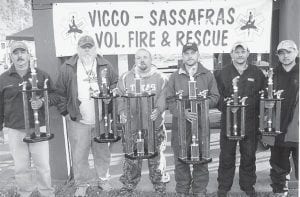 The Vicco-Sassafras Volunteer Fire & Rescue Department held its annual bass tournament May 8. In the event, eight boats out of 30 weighed in fish by the 7 a.m. deadline on May 9. First place went to Scott Caudill and Scott Fields of Vicco, who received $1,200 for first, $500 for big bass, $50 for first fish weighed, and double trophies. Their total weight was 5.49 pounds. Second place went to Ben Bentley and Van Grigsby of Whitesburg, who received $800 and double trophies for a total weight of 4.59 pounds. Third place went to Doug Couch and Delbert Adkins of Leslie County, who won $400 and double trophies. Their weight was 4.30 pounds. Pictured are (left to right) Ben Bentley, Van Grigsby, Scott Fields, Scott Caudill, Doug Couch, and Delbert Adkins.