These jars of the synthetic drug known as “bath salts” were recovered by the Letcher County Sheriff ’s Office.

With the drug known as “bath salts” becoming more of a problem in Letcher County, Sheriff Danny Webb says his office is working hard to try to decrease the amount of the designer drug being brought into the county.

“Bath salts have become such a problem that we are arresting people who are so disoriented they don’t know where they are,” said Webb.

Webb said that after his department shut down a Mayking business that sold synthetic drugs, abusers began ordering them off of the Internet. Webb said he and his deputies are working with the U.S. Postal System to get a handle on the packages, many of which are mailed C.O.D. (collect on delivery).

Sheriff ’s Lt. Brian Damron recently contacted a website and placed an order for about $1,000 worth of the bath salts, which have nothing in common with the legal products people put in their bath water. The order was placed from a company in Texas, but was shipped out of Nevada. 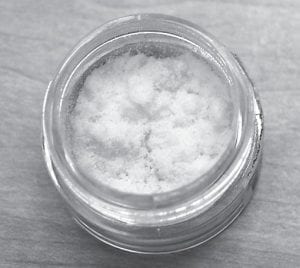 Illegal “bath salts” seen up close. The synthetic drug has nothing in common with what people use to bathe in.

“I can’t tell you who is shipping it because they can write whatever they want on the label,” said Damron. “It’s almost impossible to track.”

After a postal inspector in Lexington was alerted by the sheriff’s department, the package was seized. Since it was a C.O.D. package, the company lost out on the $1,000.

Once a postal inspector seizes the package, the person who ordered the illegal bath salts will receive a letter saying that the package has been seized and an investigation has been started.

“Our concern is it presents a very huge danger,” said Damron.

Damron fears that someone under the influence of illegal bath salts may pull a gun or a knife on whoever is delivering packages containing what is actually a drug known as MDPV.

Damron said bath salts are the latest growing trend of substances to be abused in the area. He said OxyContin, lower level pain pills, nerve pills and methamphetamine were among previous popular substances to abuse.

“The same person who abused the other drugs would now be abusing bath salts,” said Damron. “Someone with a $100-a-day habit can now buy $50 worth of bath salts and have a high for three or four days.”

He said people are consuming bath salts by snorting them, injecting them or smoking them similar to hard drugs like cocaine, meth or PCP.

Damron said he has arrested numerous people who have ingested the drug.

“It’s tying into a lot of complaints we are responding to,” said Damron. “It’s definitely having an impact on our day-to-day (work).”

People who ingest bath salts can become jittery, fidgety and disoriented to the point that it is hard to understand what they are saying. Abusers often have numerous sores visible on their body.

“We see something that exhibits the same symptoms as excited delirium,” said Damron. “The body core temperature rises. They feel a need to take off their clothes. They sweat profusely.”

Damron said abusers often become so unruly a Taser gun has to be used to subdue them. However, Damron said the electroshock weapon is only mildly effective on someone who is high on bath salts.

The sheriff ’s department is working with the Letcher County Commonwealth’s Attorney’s Office and the Kentucky Attorney General’s Office to fight the problem with bath salts and other synthetic drugs.