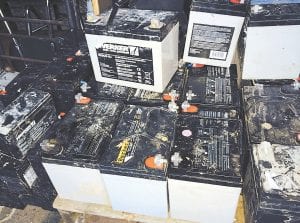 Pictured above are some of the batteries stolen from natural gas wells belonging to EQT. Two men have been charged with the crimes.

Police have charged three men in connection with stealing 82 batteries from as many well sites located between Neon and Deane.

Clinton Dale Fleming, 34, of 168 Yonts Fork, Jackhorn, and Bradley Johnson, who is lodged in jail in Wise, Va., are charged with theft (less than $10,000), theft by deception and criminal mischief.

This case will be presented to the Letcher County Grand Jury.

Ingram and Fleming, who are being held in the Letcher County Jail, were both served outstanding warrants regarding a theft at Walmart in Norton, Va.