Battle over mountaintop mining is escalating 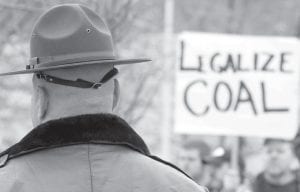 Environmental activists gained more momentum this year than in the past decade against the form of strip mining known as mountaintop removal, though they have yet to mobilize the millions of supporters they want.

The activists have harnessed the power of the Web, social networking and satellite phones. They’ve chained themselves to heavy equipment, blocked haul roads and climbed trees to stop blasting. They’ve marched for miles, hung banners and been arrested.

And yet they struggle to overcome the collective indifference of average Americans, plugged in to affordable electricity produced largely by coal-fired power plants.

“It’s not part of the national conversation yet, but it definitely needs to be because it’s an indication of what’s wrong with our country — corporate greed,” says ex-Marine Bo Webb, whose Naoma home sits below a mountaintop mine and within 10 miles of three coal-waste dams.

In mountaintop removal mining, forests are clear-cut. Explosives blast apart the rock, and machines scoop out the exposed coal. The earth left behind is dumped into valleys, covering intermittent streams.

Coal operators say it’s the most efficient way — in some cases, the only way — to reach some reserves. They also argue they reclaim the land so it can be redeveloped. Critics say the land is ruined forever, and that people, property and the environment suffer unnecessarily.

“This is sort of the quiet apocalypse that is happening in the hills and hollows of West Virginia that people in Los Angeles don’t know about,” says Nell Greenberg of the San Francisco-based Rainforest Action Network. “We’re trying to take the shroud off.”

Greenberg says she senses a “bubbling up” of national interest that dovetails with growing demand to replace fossil fuels with clean energy sources. One day last month, she says, more than 65,000 people e-mailed the U.S. Environmental Protection Agency.

Her group has chapters in Philadelphia and Atlanta taking regular action, “and MTR isn’t happening there,” Greenberg says. “But they get the connections.”

So why don’t others?

Although the practice may seem tailor-made to stoke public outrage, it lacks a cuddly mascot. Its victims are not photogenic polar bears or spotted owls; they are people and places.

During the 2008 presidential campaign, Americans voiced strong opinions on whether oil companies should drill in the Arctic National Wildlife Refuge. People cared because the debate pitted $4-per-gallon gasoline against Alaska’s majestic, snowcapped mountains.

But there is no sticker shock at the light switch. The cost of electricity has grown slowly and steadily. Tolerably, even.

“A lot of people who live directly in the shadow of this do spend time wondering why the rest of America doesn’t care,” says Vivian Stockman, of the Ohio Valley Environmental Coalition in Huntington. “They wonder out loud whether the sort of ‘hillbilly’ stereotype helps people dissociate themselves from what is happening here.”

But plenty of people with power are paying attention.

“The practice of mountaintop removal mining has a diminishing constituency in Washington,” Sen. Robert C. Byrd, a West Virginia Democrat, warned last week. “Most members of Congress, like most Americans, oppose the practice.”

Just before the Thanksgiving holiday in late November, a federal judge ruled the Army Corps of Engineers broke the law by failing to give the public enough of a say before issuing permits. The corps was already considering rules to end a fast-track system for obtaining such permits, and the EPA was already holding up 79 strip mine permits in West Virginia, Kentucky, Ohio and Tennessee for additional scrutiny.

The environmentalists are “waking up a pretty big industry that has maybe taken the opposition from some of these groups for granted,” says Chris Hamilton, senior vice president of the West Virginia Coal Association.

The industry fights back by equating support for coal with patriotism, and by portraying opposition to mountaintop removal as opposition to gainful employment.

Virginia-based Massey Energy organized a “Friends of America” rally on Labor Day. A “Faces of Coal” ad campaign focuses on people whose jobs the industry says are at risk. TV ads tout the ways the industry benefits communities.

“Although the industry has always had challenges,” Hamilton says, “I’m not sure they’ve been quite as dramatic or as threatening as they are today.”

Ten years ago, when environmentalists began the mountaintop removal fight, few people knew the term. Now they get nods of recognition. But Stockman says cutting through an “infotainment culture … where news is dominated by what’s going on with Britney Spears’ navel or Tiger Woods’ private life” is still a challenge.

And that, says fellow activist Webb, is why Kennedy’s visit matters.