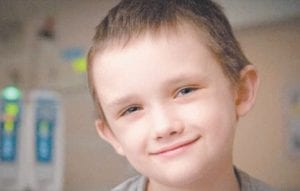 They faithfully prayed. Family, friends and strangers surrounded them with love. And their son, Brennan, never gave up hope.

Their story — one met with highs and lows — inspired a song recently recorded by country music singer Darius Rucker. The song — Possibilities — was released online earlier this month as a holiday promotion for St. Jude Children’s Research Hospital.

Brennan, of Augusta, Georgia, received three of his four bone marrow transplants at St. Jude in Memphis, Tennessee. He was diagnosed with acute myeloid leukemia in January 2009 on the eve of his seventh birthday. Brennan, 12, has been in remission since February 2011.

The Simkinses and the family of Patrick Chance, of Atlanta, inspired the Press On to Cure Childhood Cancer Fund for pediatric cancer research. Patrick, the son of Augusta natives Erin and Stephen Chance, fought neuroblastoma before succumbing to the disease in 2012.

A blog post by Brennan’s mother led his dad to write lyrics and music for the song with Joe Stevenson, a close family friend and local music promoter. Stevenson pitched the song idea when Brennan’s condition worsened after his fourth transplant.

“We had gotten ourselves into the mindset of ‘Here we go again,’?” Turner Simkins said. “He knew it would be something to take my mind off things.”

After the song was recorded locally, it got a professional touch at a Nashville studio. The song had potential to go mainstream, they thought.

They tried pitching it to a few artists but it didn’t catch on until Simkins met Rucker at the 2013 Guitar Pull, an annual country concert at James Brown Arena. Rucker is a longtime supporter of St. Jude.

Rucker, a Grammy winner and former lead singer of Hootie & the Blowfish, recorded the song in Memphis. Simkins, Stevenson and their families attended the one-day session in July, along with the Chances.

“It’s a lot like the version we sent him but it definitely has Darius’ signature on it,” Simkins said.

Music helped comfort Brennan during his years of treatments. He had favorite albums, and his dad would often play guitar for him in the hospital.

At the beginning of the video, Rucker explains why he chose to record the song.

“Music is really good at giving people hope to think things are going to get better. That’s what this song is all about,” he said. “I think a lot of parents, when their kids get sick, hope is so hard to find. When I heard it, I was excited to do it.”

Simkins said the song represents the remarkable stories of St. Jude patients and the army of people who supported Brennan and others. He hopes listeners remember to believe in the possibilities, even in tough situations.

“Believe one day you’ll get out of it,” he said.