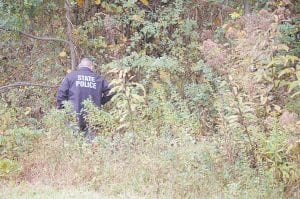 A Kentucky State Police officer kept check on a black bear after the bear, pictured below, found its way to a ditch after being hit by a car Tuesday. The bear was later euthanized.

A black bear was euthanized Tuesday afternoon after being hit by a car at Ermine.

The female yearling was injured at about 12:15 p.m. after being hit while crossing U.S. 119. The bear lay on the shoulder of the highway for about 20 minutes before managing to crawl under a guardrail and hobble to a ditch at the foot of a hillside. The bear remained in the ditch for about 90 minutes before Kentucky Department of Fish and Wildlife officials decided the injuries were too severe for it to survive. The bear was then shot.

“It was lying there and couldn’t move its head. It was done,” said Frank Campbell, regional supervisor with the Kentucky Department of Fish and Wildlife. “We finally went ahead and put it down.”

Measurements were taken and the animal was being transported to a necropsy laboratory in Frankfort for tests, he said.

The bear, estimated to be about a year and half old, was tagged and wearing a radio collar. Campbell said the bear was found previously at the Pine Mountain Wildlife Management area near Little Shepherd Trail. 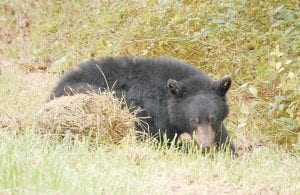 Vehicle collisions involving black bears have become more common in Letcher County as the region’s bear population continues to grow. Nearly all of Letcher County lies inside a small portion of southeastern Kentucky that is considered the state’s “breeding range” for black bear (the range also includes all of Harlan County, nearly half of Bell County, and small portions of Leslie, Knott, Pike and Martin counties).

The woman driving the car that hit the bear was not injured, said Letcher County Sheriff Danny Webb.