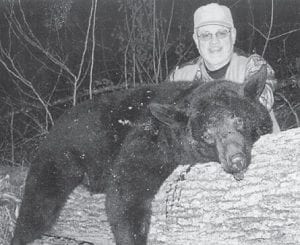 — Jerry Ingram of Smoot Creek, killed this 205-pound black bear on Linefork during the annual bear season in Letcher County. This was one of the first bears killed in Letcher County since the season started three years ago. It was Ingram’s first year hunting bears, and he said he felt very lucky to get one. He plans to have the bear mounted for a trophy and there is bear meat in several freezers.