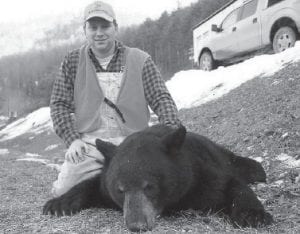 With the state’s first black bear harvest of the modern era now in the history book, host Tim Farmer sits down for the bear facts. Sportsmen Danny Smith of Pike County and Harlan County’s Billy Dixon describe their adventures in the wintry hills of southeastern Kentucky and how the early December snow helped them track the bears.

Elsewhere, in the Daniel Boone National Forest, Farmer showcases some of the area’s beauty. On the Licking River in Morgan County, he remembers, as a youth, how these woodlands offered sensational squirrel hunting, stream fishing and unforgettable scenery.

“Kentucky Afield” is a production of the Kentucky Department of Fish and Wildlife Resources. It is the longest continuously running outdoor television show in the nation. The program airs at 8:30 p.m. on Saturdays and repeats at 4 p.m. on Sundays on KET 1.