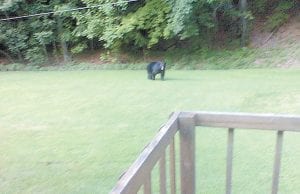 Saundra Hall of Forest Hill Lane, Jenkins, was out mowing grass on June 8 when this bear came out of the mountains at 7:30 p.m. It was still daylight. She turned around and saw the bear when it was only about two feet from her. When it stood up it was about six feet tall. Mrs. Hall reported the bear to her neighbor, Fleming-Neon Police Chief Mike Dingus, who eventually had to shoot rubber bullets at the animal to get it to leave. This photo was taken by Mrs. Hall’s husband, Wilburn Jimmy Hall. The couple’s son, James Hall, said he is 43 years old and had never seen a bear in Jenkins before. The younger Hall says Chief Dingus deserves praise for answering his mother’s call for help.