Bears not welcome at Ike’s 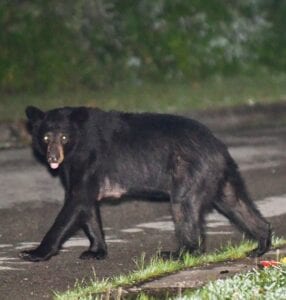 A couple of weeks ago I was remarking on the unusual abundance of songbirds we’ve had here on Charlie Brown Road in 2020. Numerous readers, from far and wide across the state, have also told me that they don’t recall birds ever being as prolific as they are this year. I’ve even had similar observations from folks in the Carolinas, Tennessee, Arkansas, Texas, Ohio and Maryland.

However it’s not only rarely seen birds that are showing up in Paint Lick and our nearby environs. We’ve had a host of other critters around our place, some of which are becoming a bit friendlier than I’d like them to be.

For example, an adult raccoon recently decided that my cat’s food bowl on the front porch made for easy meals. I figured it was simply waiting for the sweet corn to get ripe.

Loretta suggested we borrow one of those Havaheart live traps and “relocate” it just before she discovered that it also had two rat-sized babies following it around the yard. Now it has been deemed a precious mama that needs to be protected at all costs.

One night last week I stepped out onto the porch and met Mama ‘coon halfway up the front steps. She simply stared me down and attempted to stand her ground.

Half a cup of cold coffee was still sitting on a chair by the door. I instinctively grabbed it and threw the contents into the ‘coon’s face. I’m pretty sure it left skin on the concrete when it took off. Neither it nor its offspring have since been seen and there’s no indication that it has raided the cat’s bowl for nearly a week now.

Hopefully it has taken up with some neighbors half a mile up the hill. I know that they feed their cats outdoors and I know for sure they don’t raise sweet corn. They may find the baby ‘coons to be as adorable as my wife does and actually start feeding them on purpose. In the meantime I’m wondering if coffee would keep them out of my garden. I’d set out buckets full if I thought it would help.

Red foxes are fairly common hereabouts. We see them alongside the roads almost weekly, late in the day, on trips to Berea, Richmond or Lancaster. However, this summer is the first time I’d ever seen a gray fox since we’ve lived in Garrard County and this one is much braver than the reds. Loretta has seen it a couple of times trotting down Charlie Brown Road within 75 feet of our house. It literally paid her no mind and kept on going, in no apparent hurry after it obviously saw her on the porch.

I’ve seen it three times, but, on each occasion, it has bolted and run across the field. Its tail is so large and bushy and out of proportion to the rest of its body that it seems to defy gravity when it runs. I suspect it is eyeing my neighbor, Katie Rollins’s, chicken house. Or maybe it has dibs on the 3 different broods of young wild turkey poults we’ve already seen crossing the road.

We see deer regularly within sight of the house but when they see us we usually only see their white tails going in the opposite direction. Then, last Thursday, two does and a spike buck wandered into the field in front of our place without paying us any attention as Loretta grabbed her camera and began snapping pictures. Before we realized what was happening, all 3 of them had crossed Charlie Brown and jumped up into the garden about 100 feet from where we were sitting. Loretta shooed them off but they were in no hurry to leave our bean patch. If ‘coons don’t get the sweet corn, the deer obviously know it’s there.

So far, we’ve only seen photographs of the bears and they have been spotted about 8 miles from our place. I figure it’s only a matter of time, but, at least, we don’t have any beehives. My buddy, Ralph King, is a beekeeper just outside Berea. He can have the bears.