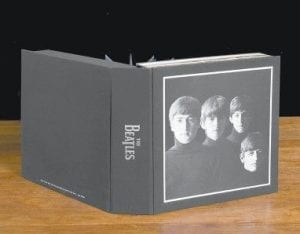 In this image released by Apple Corps Ltd., The Beatles’ remastered catalog “Box of Vision” is shown. (AP Photo)

Hard to believe that it’s been 40 years since the Beatles sang “You Never Give Me Your Money.”

You had to expect at least one cheap shot, didn’t you? The Beatles’ remastered catalog and a dazzling coffee-table “Box of Vision” hit the market Sept. 9, as most dedicated fans had known for months. Fanatics lined up, but for most people, a purchase decision is more likely to be financial than musical.

Technicians at Apple Corps Ltd. spent four years cleaning up and giving a digital punch to the master recordings left behind by the Beatles. Each is available individually, as well as in a $259.98 box set that includes the band’s original discs, plus the “Past Masters” singles collection, 14 albums in all. Mini-documentaries are included for all but “Past Masters.”

Also on sale is a $298.98 box of mono mixes for each album through the “White Album”; after that the music was only released in stereo. For those under age 50, mono has the same music coming through each speaker (stereo splits different parts of a track through different speakers) and was the dominant music system in homes until the late 1960s. At first, the Beatles devoted more attention to their mono mixes.

The “Box of Vision” is an $89.98 package (plus shipping — it’s only available by mail order) to fit all of the CDs with album-sized reprints of every album’s covers and liner notes — yet no actual CDs included.

Do the math: it’s possible to spend upwards of $350 and receive not a single note of new music.

Given that we’re in an era where artists have a hard time convincing fans they should pay for ANY music, that falls into the selling-ice-to-Eskimos category. Despite that, despite the economy, Amazon.com sold out its allotment of boxes and has a waiting list of buyers.

Now, this is the greatest catalog in popular music, so if your collection is Beatle-less, the box is a terrific buy. Really, though, what serious pop music fan doesn’t already own some of these albums already?

Since the albums contain no outtakes or alternate versions, the remaster is the attraction. The advice here is to arrange a test-drive: buy, or borrow, an individual disc ($18.98 list, $24.98 for the White Album and “Past Masters”) to see how much difference the sound makes before setting aside a few hundred bucks for one of the boxes.

In the case of “Rubber Soul,” what’s striking is how the new mix let you hear each background singer with sparkling clarity. A tambourine feels like it’s jingling in your ear.

It sounds great. It ALWAYS sounded great, frankly. For an average person with an average sound system, the differences aren’t going to make it seem like an entirely new listening experience.

What is new here are minidocumentaries on DVD, about three minutes apiece, on each album. They feature interviews with band members and producer George Martin, seemingly left over from the “Beatles Anthology” days, and some studio banter.

They’re all fun and occasionally enlightening. Ringo Starr described the lengthy studio sessions for “Sgt. Pepper’s Lonely Hearts Club Band” by saying, “It’s a fine album, but I did learn to play chess on it.”

Yet that mini-doc talks little about the album’s epic “A Day in the Life.” No time. Each piece is like a slightly elongated trailer for a show you’d like to see but doesn’t exist.

The “Box of Vision” is a beautiful package, with the groundbreaking photo of the four Beatles with their faces in half shadow on the front of a box that has the size and shape of old record albums. Inside are plastic sleeves to insert copies of CDs, purchased separately, and two books.

Both are exhaustive. One lists the Beatles’ complete discography, detailing the differences between British and American releases, which were substantial in the first half of the band’s career, and all of the reissues. Another reproduces the album covers and all of the liner notes, including booklets of later CD releases like the “Anthology” series.

It’s pleasantly memory-jogging and reproduces that experience, from before the CD era, of having something substantial you can hold in your hands while listening to the albums.

All of these packages ooze class and quality. Fans must decide for themselves if it’s worth paying for things they’ve paid for before.