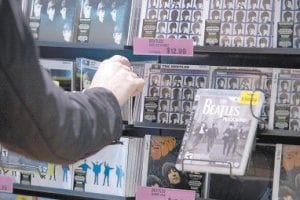 In this Sept. 9, 2009 file photo, The Beatles re-mastered albums are seen in a downtown record store in Vancouver, B.C. (AP Photo/The Canadian Press)

Nearly 40 years after breaking up, The Beatles are still breaking records for album sales.

EMI Group PLC says consumers in North America, Japan and the U.K. bought more than 2.25 million copies of the Fab Four’s remastered albums in the first five days after their Sept. 9 release.

Most of the records were broken for most simultaneous titles in the top-selling charts by a single artist.

On Billboard magazine’s pop catalog chart, for example, the band had 16 titles in the top 50, including all 14 re-mastered CDs and two box sets.

The Beatles’ original U.K. studio albums were re-mastered at Abbey Road Studios in London over four years and released to coincide with the sale of “The Beatles: Rock Band” on the Xbox 360, PlayStation 3 and Wii.