Beau Allen can succeed for UK in SEC 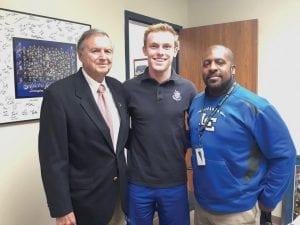 Before his team played Lexington Catholic this season Frederick Douglas coach Brian Landis watched eight game videos of Catholic quarterback Beau Allen. He was impressed then, but even more impressed after his team beat Catholic 42-31.

“Beau was as good as advertised. I was more impressed with each game I saw him play and then against us he showed his grit and toughness. We hit him and were able to get pressure with our front four, but he never got rattled,” Landis said. “My worry going into the game was his ability to escape pressure and find his guys downfield. He did a good job, buying some time when we missed and was able to make some great throws.”

Allen completed 28 of 44 passes for 286 yards and one score against Douglas. He threw for a touchdown and ran for another one in Douglas’ 42-31 win. If those numbers don’t impress you, consider that Douglas has given up just 36 points in 12 other games and has shut out eight teams.

Allen won the Paul Hornung Award last week given by the Louisville Quarterback Club to the state’s top high school player. He threw for 3,683 yards and 38 touchdowns in 2019 and ran for 517 yards and 12 scores. The Lexington Catholic quarterback finished his career with 11,439 yards passing and 127 touchdowns, both fifth all-time in Kentucky, along with 1,133 yards rushing and 20 more touchdowns. 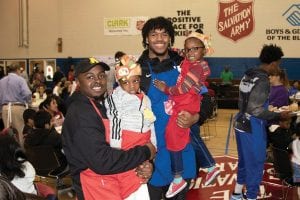 Keion Brooks Jr. is not playing as well as he wants. However, he understands he’s a role model for youngsters across the state and enjoyed serving Thanksgiving dinner at the Salvation Army. (UK Athletics)

Catholic coach Nigel Smith, a former UK player, believes the “sky is the limit” for his star player in college and is not worried about him being overwhelmed by SEC competition like some are.

“I think his talent speaks for itself but I think one of the things he has really picked up the last couple of years is knowing when and where to use his talent, and that includes his legs,” Smith said. “He is probably as underrated as a runner as a pocket passer would be. He led us in rushing several games the last two years. He had almost 200 yards rushing in the Belfry game (in the playoffs) last year.

Kentucky coach Mark Stoops watched the Catholic-Douglas game and Landis told the UK coach that Allen “was elite” when it came to moving in the pocket despite the pressure Douglas’s talented defense put on him.

“He does a great job of getting out of trouble, feeling pressure and avoiding pressure while keeping his eyes down the field,” Landis said. “He is sneaky fast as well. He is deceiving. Faster than he looks. Made a few big first downs with his legs against us.

“He’s a tough kid. We got after him pretty good, put him on the ground, but he never got rattled. It was impressive. He’s not the kind of kid that is going to get gun shy after taking a lick.”

That’s one reason Catholic was able to make some big comebacks in games this season. Allen doesn’t back down from adversity.

“We were down in a lot of games and we handled it the right way. We handled tough situations and came back and won games, and I am so proud of that,” he said.

Allen understands how difficult it was for UK to change offenses midseason after injuries sidelined the top two quarterbacks. The Cats lost the ability to pass when starter Terry Wilson went down with a season-ending knee injury and then backup Sawyer Smith became ineffective in his second start due to injuries. Stoops finally moved receiver Lynn Bowden to quarterback in game six and UK has basically a one-dimensional running offense now.

“They won big games and did a great job changing the offense,” Allen said. “Nobody in the world would have expected to be in the situation they are in and nobody I can think of in a situation like that could have done any better than what they have done. I really think highly of them (UK coaches) for the way they are winning games.”

Landis has no doubts Allen has the talent to help Kentucky keep winning. He thinks Allen will “be just fine” in the SEC.

“He has the things you can’t teach. The competitive spirit, toughness, accuracy and vision. The good ones have that stuff. He is elite in some of those areas, so yes, I think he will be a great addition to UK,” Landis said. “He processes well, makes good decisions for the most part, and competes.

“And he’s a great kid. I’ve known him for a short while now, and absolutely one of the most genuine kids you will ever meet. I wish him all the best. Glad I don’t have to play against him again.”

Freshman Keion Brooks Jr. is still adjusting to what Kentucky coach John Calipari expects from him and needs from him, especially with Nate Sestina out indefinitely with a broken wrist. Brooks is averaging 17.7 minutes, 5.4 points and 4.0 rebounds per game while shooting 45.7 percent from the field going into Saturday afternoon’s game with Fairleigh Dickinson.

However, Brooks has quickly learned just how admired UK basketball players are and become role models for young fans across the state.

With Sestina out, Brooks admits there have been some “tough times” and that him and others may have to play more minutes until Sestina gets back.

“We have got to play through some fatigue but Coach and everybody on this team have the belief that anybody who goes out there can make a positive impact on the game,” Brooks said.

The positive for him is that with Sestina out, he’s going to play more and get more opportunities to learn, grow and either succeed or fail. He’s struggled from 3-point range (2-for-7) and at the foul line (4-for-11). However, he is averaging a rebound per 4.5 minutes played.

“I’m not where I want to be. I always have the mentality that I got room to get better and there’s things I can learn and improve on throughout the game,” Brooks said. “The minutes that I have had, I feel like I have done a pretty decent job of trying to make an impact. I’m going to practice and keep going up and talking to Coach Cal to see what I can do to help our team get better.”

Punter Max Duffy has had an All- American type season for Kentucky by leading the nation in punting average most of the season and is one of three finalists for the prestigious Ray Guy Award given to the nation’s best punter. However, what makes Duffy happiest is that despite the adversity UK has faced this year the Wildcats are still bowl eligible.

“We also get that extra month of practice. We’re all young guys, which I think means a lot. We get to travel for a team, for a week, which we only get to do that once a year,” Duffy said. “I think it really bonds the guys, I know I’ve made some really great friendships, even more so over the bowl week (last year).

“It was great last year, and to be able to go do it again is awesome for the team. Especially after coming through all the adversity this year, losing our quarterback and having a new defense and all that kind of stuff, I think it’s a pretty impressive effort to get where we have, and hopefully we can finish it off next week.”

Quarterback Lynn Bowden, the catalyst to UK’s resurgence with his move from receiver at midseason, says it “definitely feels good” to be bowl eligible.

“It means a lot to us. Me personally cause everyone doubted us. You know just making a switch they said we weren’t going to be good. I mean our record doesn’t show but I think we are a pretty damn good team,” Bowden said.

So does senior guard Logan Stenberg, who will be playing in his fourth bowl game.

“I am just happy to be a part of it. We have had a lot of great guys on this team over the past four or five years,” Stenberg said. “We have all chipped in and helped build this program to where it is today and I am glad I am leaving it better than it was and beating Louisville in our final home game was the best possible way to go out.”

Kentucky volleyball swept Mississippi last week to claim its third straight SEC championship and earn the right to host NCAA Tournament play again this week where the Cats will be favored to win and advance to the regional.

Kentucky (23-6) will play Southeast Missouri State (23-10) on Friday and if it wins will play the Northern Kentucky-Michigan winner on Saturday for a berth in the regional that likely will be hosted by top seed Baylor. The other two top seeds in the region are Purdue and Washington going into the first-round games.

“I hope we go to practice Monday and we grind hard and get better each day. All I can think about is getting better on Monday and whoever we play (in the NCAA) and we will give them our undivided attention,” Curry said after clinching another SEC title.

She won’t ponder whether this team, which has won eight straight matches, is better prepared for NCAA play than others she’s been on at UK.

“This year is different. I think that whatever is supposed to happen will happen. I think we are going to work to make what we want happen happen,” Curry said. “I think it is dumb to put all these forecasts on our team and then get the expectations where you can put no pressure on yourself and just say we are going to do the best you can.”

“Do I think we are going to win the national championship? Yes. But I am going to go out there and say that, no.”

Just don’t doubt her passion for wanting the title she has been talking about since getting to UK.

“I do want to win a national championship. I am not backing down from that,” Curry said.