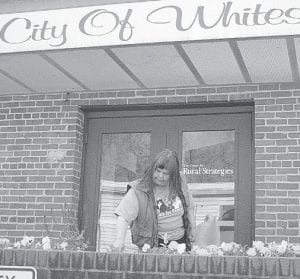 Everybody has a story to tell and the very affable Becky Johnson of Whitesburg, with a little prompting, shared her story with me. Her name sounds like a typical, native mountain girl next door but when she speaks you know right away that she is a ‘furriner.’ She and her husband Art Menius (Men-e-us) came to Whitesburg less than two years ago from North Wilkesboro, N.C., when Art became director of Appalshop. But it is not the North Carolina accent you hear from Becky. Even after living in North Carolina for 18 years, her New England accent is very recognizable.

“I grew up in Concord, Mass., and attended Emerson College in Boston where I majored in mass communication,” Becky began. “When I was a kid I loved watching the Andy Griffith Show on television in the early 1960s. I was only 6 years old but I knew what I wanted in life. I wanted to move to Mayberry, N.C., and marry Opie Taylor,” she said kiddingly. “Seriously, I wanted that kind of life . . . honest, friendly, laid back, slow paced and beautiful scenery. I also knew that I wanted to marry a goodlooking man from North Carolina just like Sheriff Andy Taylor. 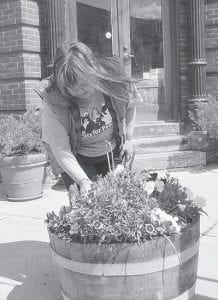 “The Andy Griffith Show was also my first introduction to bluegrass music. I loved the spirited, impromptu, folksy music they had on the show when everyone gathered around with the fiddle, guitar, banjo, bass fiddle, washboard and moonshine whiskey jugs. They were having so much fun and I knew, even then, that some day I would make that part of my life,” continued Becky.

“I went to North Carolina for the first time in 1982. I drove there by myself to see a bluegrass music festival near the home of the legendary bluegrass musician Earl Scruggs,” said Becky. “I found that the real people and places in North Carolina were very much like what was portrayed on the television show. I went to a bluegrass music festival in New York in 1986 and that is where I met my future husband, Art Menius. He was the executive director of the International Bluegrass Music Association (IBMA). Coincidentally, he was good looking and he was from North Carolina. He was also soft spoken and had the temperament of Sheriff Taylor. It was love at first sight for me but it took a little longer for him,” she said with a sheepish smile.

“I moved to North Carolina in 1989 to be with Art,” she continued. “I knew that Art was going places in bluegrass music and I wanted to be a part of his life. We were married in 1991. I took a job as a nature park tourist guide in Durham where I operated a 1/3-scale train on a 1-mile long track. I also worked as an historic interpreter in Stagville Preservation Center in West Durham.

“I am a photographer and a published writer,” said Becky proudly. “Through the years I have attended many bluegrass music events and captured much of it in photographs since 1976. In 1989 I wrote a book, ‘Inside Bluegrass, Twenty Years of Bluegrass Photography’, and had it published by Empire Publishing. Some of the books are available on Ebay. I was inspired to write the book after the father of bluegrass music, Bill Monroe, died. That was when I realized that the first generation of bluegrass musicians would soon be gone and someone needed to preserve that part of our history.

“When Art and I moved to Whitesburg I heard about a quaint little coffee shop, Summit City Lounge, which was serving a new coffee. I love the atmosphere of college town coffee shops so I went there often to enjoy the relaxed, laid back atmosphere,” said Becky nostalgically. “We had only been here a couple of weeks and I was just trying to get acquainted with everyone. The whole county was excited about the upcoming Mountain Heritage Festival and folks in town were decorating the store windows for Whitesburg Day. As I walked down Main Street on my way from the Summit City Lounge to Appalshop, I looked at the flower barrels on the sidewalks and saw dried-up flowers, weeds, cigarette butts, cuds of tobacco and garbage. It was only two days before Whitesburg Days. By the time I was going past city hall I was fuming. ‘This is such a beautiful little town except for that eyesore,’ I was thinking. “Instead of continuing to Appalshop I took a detour and marched up the steps to city hall. Before I went inside I stopped outside and regained my composure before I met Mayor Craft. I introduced myself and made him an offer. ‘If you will buy the flowers, mulch and fertilizer, I will rejuvenate every flower barrel in town and have it done before Whitesburg Days.’ He said, ‘Let me see what I can do.’ He called me that evening and said, ‘I’ve got everything you asked for.’ He also gave me a couple of city workers to help. We worked from dawn to dusk and finished a day early. They were beautiful. I volunteered to do the work free of charge but the mayor gave me a nice bonus anyway. So, to summarize the experience, I walked into city hall to make a complaint and walked out with a job. I have been doing the job of maintaining the flower beds and barrels on a flexible, parttime basis ever since.”

Becky also works seasonally at Food World each spring selling flowers, vegetable plants, mulch and potting soil. “I try to sell out the entire inventory by the middle of June so they won’t get stuck with a bunch of wilted flowers after planting season. I try to work myself out of a job,” said Becky with a smile.

Becky’s part-time jobs have to play second fiddle to the job she loves most however. As a disc jockey at WMMT radio, she hosts a weekly show, “First Generation Bluegrass” at 88.7 FM where she plays music from the 1930s to 1975. The show airs each Wednesday from 1 to 4 p.m. She also embellishes the music with the history surrounding the music and the artists.

Becky, reflecting on what she likes about Whitesburg, said, “It really is a lot like Mayberry. People go out of their way to make me feel welcome. Everybody knows everybody and if they don’t know you they will make an effort to get acquainted. When I am working the flowers on the street, store owners make the overture to come out and chat and people passing on the sidewalk always make a point to compliment me on my work. I feel like I have found my own little Mayberry right here in Whitesburg.”