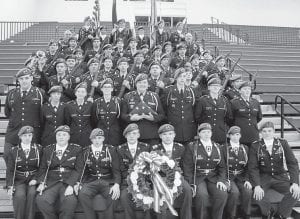 The Letcher County Central High School JROTC participated in the Veterans Ceremony at the school on Nov. 11. Forty-four cadets took part in the ceremony including the Honor Guard. Alpha and Bravo performed the 13-Flag Fold. (By SFC Jessika Moushon)

Oh how thankful everyone in this area should be that we have been having such beautiful weather this late in the year. I wish it could be this until next June.

I made tentative plans go see Beechwood Band then decided against it as I have been very sick this week. But being a woman, I changed my mind.

Friday morning, I drove to my daughter Anna Nottingham’s to go to Indianapolis with Anna and her family.

Bands of America held Grand National Competition at Lucas Oil Stadium, which is the home stadium of the Colts. There were 500 bands registered and then they were narrowed down to 95 bands for semi finals, and 34 bands in finals.

Beechwood came in second place in their division. Of course first would have been better, but they have nothing to be ashamed of. Everyone can’t be number one.

It really was an awesome thing to watch all the bands compete. Twenty-two states were represented; one band was from Alaska.

During intermission the Kentucky Wildcat Marching band performed, and that was amazing. The Cincinnati Bear Cats Marching Band performed Friday evening, and Beechwood performed at 7:30 p.m.

Saturday morning, the band performed very early, which meant a late night for the bands and an early morning as the band had to get up at 4 a.m. and be at the stadium at 6 a.m.

Anna and I were up before 5 a.m., showered, dressed and out the door. Katelyn went with us, but we left Scott and four-year-old Kyle asleep.

Late Friday during competition, my four-year-old grandson got restless so his dad took him and the 12-year-old to the car. Anna and I finished watching the bands’ performances and we just happened to walk out the wrong door and we walked the whole block. Now remember my daughter is in a walking boot, and I am not in the best of health.

Had I not known how much pain Anna was in, it would have been a pleasant time as the night was beautiful with just a bit of chill in the air.

There’s an old saying, “Walk a mile in my shoes.” Well, I spent two days and one night with my daughter, and no thanks, I will just walk in my own shoes. I wish there was some way I could just bring her home with me to let her get some well deserved rest

The doctor told her she is going to be off her foot for the next four weeks, and he said he didn’t care if she was in a wheelchair or a motorized scooter.

She has four children of her own, babysits with several little ones, and never gets much sleep.

Sarah has surgery Tuesday on her foot, and Anna is having surgery in December.

Saturday was a long day as Anna didn’t know until 5 p.m. if Beechwood would perform or not. We went to the Children’s Museum. As we were walking the corridor my gracefulness took over once again. The carpet has ridges so of course the tip of my gym shoes caught and I took the plunge right into Kyle, knocking him down. I thought he had busted his forehead, but thank God he wasn’t hurt. I have a bruised knee with carpet burns.

The Children’s Museum was nice but crowded, of course. I had never been so Anna took me through a tour of Indianapolis. Downtown was beautiful as there were horse and carriage rides everywhere.

On the way back from Indianapolis I started getting exhausted so Anna decided it was best to drop me off at home since we were going close to my house, and I could get my car later.

I didn’t protest too much. I called Vicki Power to see if she was available to take me to pick up the car and of course she said yes.

As it turned out Anna and the family were coming to Harrison, and since Sarah is 17 and has her license, she brought my car home. Sarah will be going to college in Indianapolis in the fall.

I had to laugh as Sarah is called Queen of Calculus in school, whatever what that is, as she helps other students.

Once again I apologize for a short column, but this keyboard has decided to act up. I threw my printer out and this keyboard may be next. It is a new keyboard that is typing every other letter.