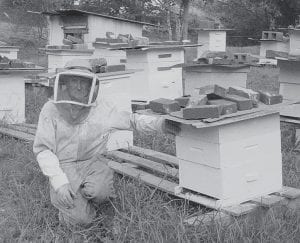 BEEKEEPER – Harold Mullins, a beekeeper, will sell his honey at the second annual Indian Summer Folk Festival at the Little Shepherd Amphitheatre site in Jenkins on October 5, 6 and 7. He is pictured at his apiary in Jenkins.

I am fascinated with the honeybee. I spoke with a couple of beekeepers recently and I have come to appreciate the science relating to the production of honey. Conversations with these apiarists stimulated my interest and sent me to the Internet to further my education. Both men, Harold Mullins of Jenkins and Teddy Fleming of McRoberts, are members of the Pine Mountain Beekeepers Association. They meet monthly at the Letcher County Extension Agency in Whitesburg. The meetings are a part of their continuing education. Subjects they address may be anything from building beehives to starting a colony to disease prevention to collecting honey to marketing their product.

Harold Mullins of Jenkins stated that he joined the group about seven years ago to find out how to prevent mites from destroying his bees. He found out that the mites are present in the woods and fields and they attach themselves to the honeybees when they are collecting pollen and nectar. They then ride the bee back to the hive and infiltrate the colony. The mites can kill the bee and/or spread disease. He learned from the Extension agent that he can kill the mites by smoking the hives with dried black walnut leaves or dried sumac berries. Commercial products such as Check Mite and Mite Away are available to take care of the problem. He said that the mites are so small they can be seen only with a magnifying glass.

He now has 31 healthy hives. At one time he had 60 hives but he over harvested and did not leave enough honey to feed the bees through the winter and lost about half of his bees.

Teddy Fleming of McRoberts stated that he likewise over harvested last year and was in danger of losing several stands of bees. He and his friend, Delbert Anderson, a fellow beekeeper and association member, fed sugar water to their bees through the winter to help them survive until springtime when the flowers and trees started blooming again. Then a quirk of nature occurred. This year the unusually warm weather in March caused the blooms to come out too early. When the temperatures dropped to the teens in April, buds were nipped and blooms were destroyed. Fruit crops were destroyed and the honeybees were not able to gather enough pollen and nectar to make early honey. There was virtually no poplar honey this year. Consequently they had to continue feeding sugar water to their bees to keep them alive until the other trees and flowers began blooming.

We humans sometimes forget that the purpose of the honeybee is not to make honey for human consumption. Their primary function is to pollinate plants to cause them to produce fruit and to make honey to provide food for themselves.

“It has still been a good year for honey production,” said Fleming. “The Lind and sourwood trees bloomed later in the season and the bees went to work. It has been a long, dry summer and the bees were able to work more days. They’re a lot like us humans; they like to stay in the house when it’s raining. As a result the production later in the summer made up for the loss of poplar honey earlier in the year. As a bonus the honey has a lighter color which most people prefer. In late summer the bees work wildflowers and domestic flowers and the honey has a darker color and a stronger taste.”

There are many stories about the health benefits of eating honey and the therapeutic effects of bee venom. Mullins stated that he used to have arthritis real bad in his hands but where he has been stung so many times while handling the bees, the arthritis is not nearly as bad as it was before.

Fleming stated that he and his wife, Judy, make a tea of honey, vinegar and hot water each day. He believes that the tonic keeps blood pressure and cholesterol in check. Many believe that honey made from flowers indigenous to your area helps prevent allergies caused by the same plants.

“All in all it’s been a good year despite the cost of feeding them sugar water and loss of production from the poplar bloom,” said Fleming. “I’ve collected over 300 quarts and the going price right now is about $10 a quart. I sometimes wholesale it to stores and I keep some for family consumption.”

Both gentlemen agree that beekeeping is a very enjoyable hobby but it requires a lot of attention. It can be risky but most of the time it is profitable. Mullins recently lost one hive when a bear pushed it over and robbed all of the honey. He contacted the game warden who came out and installed an electric fence around the apiary. So far it’s working.

The architecture of the beehive is quite simple. It is similar to building floors in a multi-storied house. The bottom section is called the brood section. This is where the queen bee lays her eggs and hatches her young bees. It consists of 10 racks. When that section is full of honey you add another section called a ‘super’. In a very productive year the beekeeper may add three or four supers.

“You can tell when a super is full of honey,” said Mullins. “You can lift it and know by the weight. A full super will weigh about 30 pounds which will yield about 10 quarts of honey. I put the super in a plastic bag to keep it clean then take it home to remove the honey with an extractor.” (This is a centrifugal device which slings the honey from the comb.)

Some people sell the comb and others return it to the hive so the bees can eat the residue. There is a good market for the comb, which is made of a waxy substance secreted by the bee. The bees form the comb by making many hexagonal cells. The cells are used to envelop the young bees and also to store the honey. Some of the uses of the comb include: lubricants, cosmetics, pharmaceuticals and candles.

To start a new hive you must have a queen bee. The queen is easily identifiable because it is longer and bigger. You can transplant a queen from an existing stand by cutting a piece of the comb with honey in it and moving it to a new hive or stand. This will sustain the queen until it hatches eggs and builds a new colony to begin production. Another method of starting a new hive is to buy a new queen bee through mail order. This may cost from $30 to $40. I guess it’s sort of like ordering a mail order bride. (Sorry, folks, I sometimes get carried away with my human analogies.)

There is typically only one queen bee to a hive and she mates with two drones. A drone is a stingless bee which performs no work and produces no honey. Its only function is to mate with the queen. If there are too many drones in the hive the other bees kill them and get rid of them because they are consuming honey but they are not needed for mating and they won’t go out and collect nectar and pollen.

When a hive becomes overpopulated nature has a way of taking care of this problem. Part of the colony will leave in a swarm with an older queen and older workers. A skilled beekeeper can direct this swarm to a new stand and expand his apiary.

In recent years bees have been disappearing, up to 70 percent on the East Coast have disappeared and 50 percent in other parts of the country. This phenomenon is blamed on several things from pesticides to cell phone transmissions.

How serious is this problem called ‘colony collapse’? Albert Einstein was quoted as saying that without the honeybee man would have but four years left. Some feel less alarm because there are thousands of other pollinators including butterflies, wasps and other bees.

You can learn more about beekeeping when you attend the second annual Indian Summer Folk Festival at the Little Shepherd Amphitheatre site in Jenkins on October 5, 6 and 7. Harold Mullins will be there selling his honey and he would be glad to share his experiences with you.