Been a scary time for Fields family 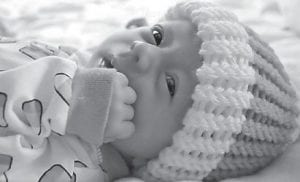 Avarie Grace Lewis was born October 18 to Brett and Elisha Lewis of Campbranch. She is the granddaughter of Robert and Patricia Lewis of Whitesburg, Richard Hall of Beaver, and Michelle and Denver Bush of Martin.

Sorry folks, I haven’t written for awhile and probably will not be writing for some time. Just wanted to let everyone know what’s been going on.

As most of you know, my husband has been having some serious health problems for the past month. I was having trouble getting him out of bed to go to the bathroom. I took him to our family doctor, and she gave him a shot. Did not seem to help.

A few days later took him to the ER. They said he had an infection and put him on Bactrim.

He continued to get worse. A week later I sent him by ambulance to the ER. They diagnosed him as having a cyst and it needed lanced open. Scheduled for surgery the next morning. He also had platelets to reverse Plavix.

The surgeon came in and said there was no way he could operate. His white blood count had gone through the roof and kidney function very high, so he sent him to Pikeville for kidney dialysis and see what they can do.

So on Tuesday, Oct. 15, we went to Pikeville. He had surgery that Wednesday. Blood pressure dropped, then he was placed in ICU for two days to get blood pressure stable, then he was moved to a floor and continued with kidney dialysis.

WBC was low and he was given two units of blood. He seemed to be doing well, just confused at times.

I got on the phone and talked to the doctor. He said that James’s heart had stopped four times and they had him on life support and would probably lose him in 10 to 15 minutes.

This is where a true miracle took place and I give God the praise and thanks for every day that I still have with my husband. We have been together for a total of 49 years, married 44 years and dated four years before that.

I called my brother-inlaw and said, “Pray, pray, pray.” He called family, friends, neighbors, churches and had them praying.

My granddaughter had it on Facebook. I prayed, cried and begged God not to let him go.

I picked up Kathy and Eddie, and away we went in the middle of the night.

When I walked in he was so pale and no vitals on his own. I tapped James on the jaw and told him how much I loved him and how much we been through, and I wasn’t ready for him to check out. I told him he was a fighter and to fight now to come back.

The nurse, Michelle Sexton (Alfred’s daughter), had us go to the conference room. The doctor met us and thought we should take him off life support and I told him to try and keep him until my son and family could get there from Indiana and that was five hours away.

He said, “We’ll try.” Maybe could keep him an hour if the heart stops, he will have to let him go. An hour later the nurse told my brotherin law to come and get me, and I thought, “Oh no.”

I went in his room, and those pretty blue eyes were open and he was batting them real fast. He could not speak, but he would respond by shaking his head.

He had lots of pain in his chest from compressions. They moved him to a room. He continued with dialysis and some more debris.

Then on Thursday, he was transferred to Lexington to the Select Specialty Hospital at Good Samaritan on Limestone Avenue.

I know he has a long road ahead, but keep praying that God will heal him and bring him back to me at home.

I love and appreciate all of you for the prayers, monetary support and Bro. Eddie Wolfe and Bro. Frank Adams for their visits.

Thanks to all of you.

Well, I’ve got to go. Until next time, may God bless each and every one of you, and keep all my family in prayer.