Belief in bogus studies, stories undermines use of vaccines, resulting in spread of diseases 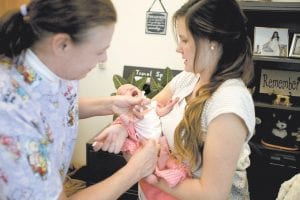 The United States has recently seen a significant rise in the number of cases of vaccine-preventable diseases such as measles, mumps and pertussis, commonly called whooping cough.

A recent report blames this on an anti-vaccine movement caused by widespread misinformation about the safety of immunizations, John Wihbey reports for Harvard University’s Shorenstein Center on Media, Politics and Public Policy.

“Over the past two decades, a combination of fraudulent scientific studies, irresponsible reporting, and well-meaning but misinformed citizen activists has led to a steady increase in the proportion of parents who have concerns about the recommended childhood vaccine schedule,” says a 2014 report from the American Academy of Arts and Sciences.

Many young parents in the United States have no memory of the time before vaccines and don’t realize how important successful vaccination programs are to prevent the reemergence of the diseases they protect us from. In 2014, the United States had 610 confirmed cases of measles and 20 outbreaks, the highest number of cases since measles elimination was documented in the U.S. in 2000, according to the federal Centers for Disease Control and Prevention.

The origin of much of this misinformation is a “fraudulent” 1998 study, published in a well-respected British medical journal, that linked the measles-mumpsrubella (MMR) vaccine to autism. And while the study never claimed a definite link between the vaccine and autism, “sensational media reports ignited a public panic and MMR vaccinations fell dramatically,” WebMD reports.

The study has since been discredited and retracted from the journal because it “was proven entirely false and even labeled “fraudulent,”” Wihbey writes. A new study, that updated this 1998 fraudulent study, has also shown that the MMR vaccine is not the cause of autism, Daniel J. DeNoon reports for WebMD.

“We are convinced there is no link between MMR vaccination and autism,” study leader W. Ian Lipkin, MD, director of the center for infection and immunity at Columbia University in New York City, said at a news conference, DeNoon reports. Lipkin noted that this study did not address the theory that the mercurycontaining preservative thimerosal might cause autism. The MMR vaccine does not contain thimerosal.

As for thimerosal, “A very large number of scientific studies have been carried out, and extensive scientifi c reviews, that have concluded there is no causal connection between vaccines or the preservative thimerosal and autism,” Anne Schuchat, director of the CDC’s National Center for Immunization and Respiratory Diseases, told DeNoon in a different article for WebMD.

But, “if we stop vaccinating, even the few cases we have in this country could very quickly become tens or hundreds of thousands of cases,” says the CDC website .

One concern is that as the vaccination rate drops, the United States will loose its “herd immunity,” which offers a level of protection across an entire community that protects even the un-vaccinated. This type of noncompliance occurred in 2011, when 15 states saw MMR vaccination levels below the target level of 90 percent, Wihbey reports. Adding to misinformation about immunizations is media coverage of activists and celebrities with anti-vaccine positions.

In an in-depth article about the media’s role in spreading misinformation that childhood vaccines cause autism, Curtis Brainard, for Columbia Journalism Review, writes: “ The consequences of this coverage go beyond squandering journalistic resources on a bogus story. There is evidence that fear of a link between vaccines and autism, stoked by press coverage, caused some parents to either delay vaccinations for their children or decline them altogether.”

And it looks like many choose to believe unsubstantiated stories rather than public-health campaigns that attempt to address this misinformation, according to a recent study published in the peer-reviewed medical journal Pediatrics.

“None of the pro-vaccine messages created by public health authorities increased intent to vaccinate with MMR among a nationally representative sample of parents who have children age 17 years or younger at home,” the study concluded.

The researchers said there should be more careful testing of public health campaign messages, suggesting that pediatricians, rated by parents in the study as the most trusted source of vaccine safety information, could be an “especially persuasive source” for this information.

The vast majority of Kentucky’s children have been immunized, possibly because state law requires immunizations for admission to school, with exemptions made only for medical or religious purposes. The CDC reported that less than 1 percent of Kentucky kindergarten children were exempted from one or more vaccine during the 2013-14 school year.

Kentucky Health News is an independent news service of the Institute for Rural Journalism and Community Issues, based in the School of Journalism and Telecommunications at the University of Kentucky, with support from the Foundation for a Healthy Kentucky.