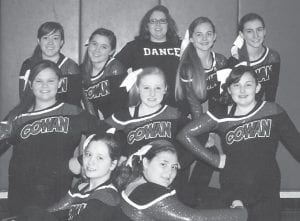 The Cowan Elementary School Dance Team will perform at the Atlanta Hawks NBA game versus the Brooklyn Nets on March 9. The students will travel to Atlanta for a few days in March to learn a dance with the Atlanta Hawks cheerleaders that will be performed the night of the game. Pictured (front row, left to right) are Jamie Craft, Becky Eldridge, (middle row) Abby Meade, Marah Boggs, Laken Caudill, (back row) Haleigh Howard, Micah Williams, coach Tabitha Craft, Emily Ison and Ashley Brown.

It is once again that magical time of the year. Everything is so pretty at night, even a bare branch that has a string of lights is pretty.

There’s a village or town that’s favorite place of mine that is always decorated, and that makes me feel, oh yes it is Christmas!

Addyston, Ohio, is a sleepy looking town all year around and some houses could use fixing up, but along Route 50 and through the village you find large bells hanging from the telephone poles. It is a simple decoration, but it means so much to me to see these come on just after Thanksgiving.

For the first time in several years it actually feels like Christmas in my heart, except the fact there’s still sadness that creeps in when thinking of my brat brother Richie Hall, but I can hear him say, “Rosella, there’s no use to cry.”

I can still hear him saying to his wife Wanda and me that he had told his brotherin law Mark sometime earlier that he wouldn’t be here at Christmastime.

I mean no disrespect to my brother Wallace Lee Hall, whom we lost a year before Richie’s death. This has just about got the best of me.

Richie loved Christmas and he would start early by having Wanda put certain amount of money back for each and every one of the kids, big or little.

In Richie’s eyes no one was as good a cook as Wanda, except when it came to making peanut butter fudge. Wanda’s sister Barbara Jones took that honor, even though Wanda makes good fudge also.

In March when I had my five-way bypass, my little brother told me that it would be at least two years before I would be able to do the things that I had once been able to do.

I blurted out without thinking, “No, it won’t!” Richie had gone through far more than I had!

Richie replied that I thought I would be dancing and climbing on ladders, and such.

I went to Hunter’s Pizzeria in Middletown to see a favorite group of mine, Ma Crow & The Lady Slippers.

Ma Crow is such a wonderful person as well as a great singer, guitar picker and entertainer. Vickie Abbott on bass does a good job singing, Margie Drees is no stranger to the fiddle and does great harmony, Trina Emig is so amazing on the mandolin and a whiz on the banjo. I am glad there’s an all female group of musicians in this area.

I really appreciate Les and Pat Wagner coming out as Pat has been in the hospital and really shouldn’t have been out in the dampness.

Larry, Rebecca and Polly Hasty were a little late as they had to go to a viewing for a friend. It is so special to have friends like this group.

My friend Vickie Power was going with me, then earlier in the week Vickie got the flu and she was just too sick to go anywhere.

Shirley Godbey and I went to VFW Post in Milan, Ind., to see three good bands. RR2 Bluegrass band really did an awesome job. Why wouldn’t they, when they have some great musicians, Greg Griffith, banjo; Jon Wise, bass; Bruce Murray, guitar; Bob Bentle, fiddle; and Gary Eldridge on mandolin who also does quite a bit of lead singing. These guys have as good harmony as I have ever heard.

I would have gone just to hear RR2. They opened the show for Wildwood Valley Boys, which is a great group. Michael Cleveland sat in with this group, and he never ceases to amaze me as he leans back and makes that fiddle come alive.

Grascals did an outstanding job as usual. Jamie Johnson and Terry Eldridge do a fantastic job. I met banjo player Kristin Scott Benson several years ago when she was picking for Larry Stephens Bluegrass Band. This little girl doesn’t have to take a back seat to anyone, that banjo is almost as big as she is.

I really had to almost nail my feet to the cement floor when RR2 turned Bob Bentle loose on the fiddle playing ‘Orange Blossom Special’. I should have told someone they might want to check the metal foldup chair that I was sitting on as I bounced in it.

If anyone is interested, I will be having a few more copies of my book ‘ The Beauty of A Rose’ printed. After the first of the year I am going to see what the cost for having a different book published. This I have wanted to do for some time.

I finally talked to Ann Calihan. There’s only one thing, Ann and I may not talk every day, and when we get started you may as well leave us alone as we have a lot of catching up to do, along with giggling like two little girls.

Ann and Johnny’s son-inlaw Jack had a bad scare with his diabetes. I am glad he is all right now.

Gwen Huff Farmer is having some problems with her hands. I really hope she gets some help with the pain. Gwen’s sister Aileen is improving some. She sure has been a very sick lady.

Shirley Wells, I miss our talks. I hope everything is alright with you. I bet you are getting ready to take your walk along the Cumberland River.

Sunday was Old Time Fiddlers’ Christmas party. We had a good turn out and the music was good. There was plenty of food, and what I ate was good, as I snitched a piece of lemon pie for main course and later I had a piece of pumpkin pie for dessert.

Friday I was close to my daughter Kay’s house. I called her at the spur of the moment to talk to her and tease her. When she answered I asked her what she had good to eat, that I was hungry.

She said she and her daughter Jodi had just finished lunch from LaRosa’s and there was an extra steak hoagie so she insisted I stop to pick it up. Kay was baking chocolate cupcakes so she had me to stay until they were finished. As I was leaving she took a few minutes to chat with me, and when she went back in the house the second batch of cupcakes had burned.

I think the statement like mother like daughter applies here. Kay makes banana bread that is so delicious, and she shares.

My daughters Angie Wiederhold and Anna Nottingham are very good cooks, and my son Keith Ballard is good at cooking too.

Keith showed up at my door last night with a small piece of steak, corn, potatoes, green beans, and garlic bread.

I laughed and said I thought it was a mom supposed to cook for her family, but in this case it is a son doing for Mom!

I talked to Doyle and Betty Ison, and ask you to please keep Betty in your prayers as she isn’t feeling very well.

I haven’t heard anything from my cousin Bev Adams this week except I believe she is trying to get out as much as possible with her family. Once again, keep this family in your prayers.

My daughter Anna Nottingham has been very sick with the flu. At first the whole family was sick during Thanksgiving then Anna decided one round wasn’t enough.

I almost forgot something important. Hello to Lola ‘Sis’ Whitaker Hogg in Michigan. Sis is the daughter of my little extra mountain mama Alma Whitaker from the Kingscreek, Roxana area. Sis was married to Ralph Hogg.

Sis called me and I really enjoyed talking to her. Ann Calihan said hello to you. Yes, Ann remembers you and the good times you two shared.

Once again that clock on the wall is chasing me, and I have someplace I have to be and a short time to get there

Hello to Lavine ‘Bud’ Whitaker and all the Whitaker bunch.

Glenora Eldridge, I hope you and your family are doing alright. Give Kenneth a hug from someone who shares his sorrow.

Polly Maucher, you have been sort of quiet, and Frick and Frack you better be good as Santa Claus is watching you.

Oh Michael Ison, you know it is winter, would you please sing that song to me, ‘I Want to Hold Your Hand’?

Keith got me some de-icer to clean my window, and I am telling you that stuff got on my fingertips and I would have paid someone to warm my fingers as they were frozen. I had never used it before and didn’t know how to use it.