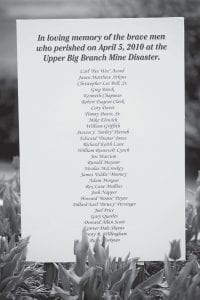 A list of the 29 miners who died at the Upper Big Branch coal mine explosion is posted at the West Virginia coal miners’ memorial on the first anniversary of the disaster in Charleston, W. Va. (AP Photo)

Family members wept and church bells pealed across West Virginia for 29 fallen coal miners on the first anniversary of the powerful explosion that tore apart the Upper Big Branch Mine.

Massey Energy Co., owner of the vast underground mine where the men died in the worst coalfi eld disaster since 1970, halted production at underground mines in West Virginia, Virginia and Kentucky. Families and friends of the victims, other miners and politicians gathered for a series of memorial ceremonies and events that continued from early morning into the night.

“These 29 brave men. The pain that they have suffered and what you have suffered reminded me of the work that has yet to be done,” Labor Secretary Hilda Solis told more than 120 relatives gathered at a private memorial service for the families in Whitesville. “Safety should never be sacrificed and these deaths should not have been.”

The families — more than 120 fathers, mothers, siblings and children — crowded the Whitesville Elementary gym to remember and pray for the miners.

“On this anniversary, we celebrate them. We celebrate these courageous miners. We remember them, each of them as individuals,” Rep. Nick Rahall, D-W.Va. said. “I know many of them through you.”

The Whitesville service was a somber, formal affair with speeches by Solis, acting Gov. Earl Ray Tomblin and the state’s congressional delegation behind 29 miners’ helmets with their cap lamps lit and photos of the victims. Students at West Virginia University set up a Faces of the Mine web site that offered profiles of the miners and planned live streaming video of the evening service from a gym at the Whitesville Elementary School in the state’s southern coalfields.

“Ultimately I’m one of those who believes that it never really does go away, the pain,” Sen. Jay Rockefeller said. “In some ways, maybe it shouldn’t because it is a form of love and obligation to those who are affected.”

President Barack Obama said in a statement that his administration is working to bring those responsible to justice and prevent a similar tragedy from occurring again.

“The Justice Department’s investigation into the mine owner’s practices in West Virginia has led, so far, to two criminal indictments,” Obama said. “We know we can also improve our mine safety laws to better provide for the safety of the men and women who work in America’s mines.”

Two miners survived the blast at Upper Big Branch, a complex of miles of underground mine workings in an area of Appalachia about 50 miles south of Charleston.

The day began with acting Gov. Earl Ray Tomblin laying a wreath of yellow roses adorned with a black ribbon at a memorial to the state’s coal miners on the Capitol grounds. Alongside the wreath was a child’s hand-drawn card depicting a cross, shovel and pick, and a plea for God to bless the fallen men. Attached was a gift, a plastic cube containing a tiny yellow toy backhoe.

Later in the day, at First Christian Church in Beckley, candles were wrapped with the reflective orange striping that miners wear underground on their navy blue work clothes. Tiny lapel ribbons in the same orange and silver were handed out to about 150 people who gathered for a brief service with prayers and song, but no speeches. Nearly all wore either a miner’s shirt or jacket, or a ball cap bearing the number 29.

Terry Ellison of Beckley lit 29 candles, a bell tolling each time, in honor of her brother, 40-year-old Steven “Smiley” Harrah of Cool Ridge. Harrah was killed as he was ending his shift and leaving the mine with the others.

“It’s just like yesterday for us, and it will never get better. We’ll just learn how to cope with it,” Ellison said, urging people to “remember the good men they were.”

The federal Mine Safety and Health Administration has said the explosion occurred when methane gas ignited, then touched off highly explosive coal dust that had been allowed to accumulate in the mine. The result was a blast so powerful it turned corners and rounded a 1,000-foot-wide block of coal, packing the power to kill men more than a mile away.

Massey denies any wrongdoing, blaming a sudden inundation of natural gas that overwhelmed all safety systems.

“The company remains fully committed to a thorough and comprehensive investigation that seeks to identify the primary causes of the explosion and provide answers to the UBB families and the communities we serve in Central Appalachia,” Massey said in a statement.

Federal officials say they hope to provide more insight into the explosion during a public meeting set for June 29.

Previous mine disasters in West Virginia, including the Sago mine explosion that killed 12 men in January 2006, spurred legislation aimed at making coal mining safer. But after Upper Big Branch, mining legislation stalled in Congress and was never seriously considered in West Virginia. Regulators have toughened some rules, particularly ones requiring mines to do more to prevent coal dust explosions, but industry considers those punitive measures.