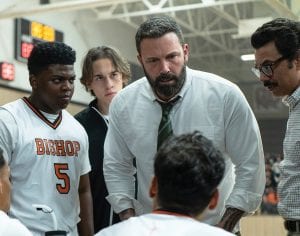 From left, Charles Lott Jr., Ben Affleck and Al Madrigal appear in a scene from “The Way Back.” (Warner Bros. Pictures/AP)

Of the many stories that have stuck with Ben Affleck from his Alcoholics Anonymous meetings, one has especially resonated for the actor. Recovery is often described as a process of removing a damaging habit from your life. One man articulated it in a more positive way. He said he quit drinking so he could be a free man.

“That’s one of the most moving things that’s stayed with me,” says Affleck. “The desire for that freedom, and so I can be accountable to my kids.”

After a turbulent few years, Affleck, 47, is trying to reclaim his life and reorder his career. In Affleck’s new film, “The Way Back,” both missions converge. He plays a former high-school basketball star brought back to coach his alma mater’s team in Gavin O’Connor’s movie, which opens Friday (March 6). The film has obvious similarities to Affleck’s life. It’s about a man struggling with alcoholism, divorce and midlife disappointment. It’s about the hard road to recovery, a path that Affleck has been walking, with a few stumbles along the way, the last three years.

“I don’t know all the answers. I’m only an expert in my own failings,” Affleck says. “But the more expert you become in your own failings, interestingly, the less likely you are to repeat them, I’ve found. That is how my life has been getting better.”

Affleck smiles. “You notice how you never succeed and all your wildest dreams come true and you go: ‘I got to change something!’ It’s when you hit a stumbling block that you say: ‘OK, let’s be really honest.’”

And honesty is what Affleck is now practicing, to a degree rarely seen in Hollywood, let alone for someone whose personal ups and downs have been such regular fodder for tabloids. In an interview with The Associated Press early last week, Affleck was candid and clear-eyed about his battle for sobriety and the roots of his drinking. Occasionally his voice quavered but mostly Affleck spoke earnestly and straightforwardly. He seemed freshly unburdened. Making “The Way Back,” he said, helped him.

When Brad Ingelsby’s script came to Ben Affleck, it was titled “The Has-Been.” Affleck was being pitched to direct. Coming off the best picture-winning “Argo,” he last helmed the Prohibition-era crime thriller “Live by Night,” an ambitious gangster film that made a modest impression at the box office. Affleck immediately connected with the character: Jack Cunningham, a former star athlete whose alcoholism, isolation and grief is lifted by a reluctant return to basketball.

Affleck appealed to O’Connor to direct. The two previously collaborated on the 2016 thriller “The Accountant,” and O’Connor (“Warrior,” “Miracle”) has proven adept at channeling larger themes through sports dramas. But until they began working on “The Way Back,” O’Connor didn’t know the extent of Affleck’s problem.

“Once we started to prep the movie, he went into rehab. He sort of fell off the wagon. So now we were prepping the movie while he was in rehab and we thought it was going to fall apart,” said O’Connor. “But he still wanted to do it. When he got out, he was incredibly raw and vulnerable and I think a little lost just in regard to having to confront the demons.”

Affleck says his drinking worsened around the time his marriage to Jennifer Garner was falling apart. Garner and Affleck, who have three children together, separated in 2015 and divorced in 2018. In those years, Affleck has made several trips to rehab. Last October, he was captured drunk on camera, which he then granted was “a slip.”

“The times that I’ve relapsed, personally, have been not been because I’ve had some bad thing happen. It’s been when I thought I had it licked,” Affleck says. “And the next thing, you’re on TMZ and it’s a disaster. That teaches me that it’s just not something I can do.”

All of that pain, and then some, went into “The Way Back.” For a scene in which Jack makes amends to his wife, O’Connor told Affleck he was just going let the camera roll.

“It was probably the second take, Ben just had a breakdown. I’m getting chills thinking about it. It was like the dam broke and everything came out,” says O’Connor. “I just remember the crew, everyone was frozen, watching him bear his soul. It was obviously real.”

O’Connor credits Warner Bros. Chairman Toby Emmerich with green-lighting “The Way Back,” a rarely seen thing in today’s Hollywood: an intensely personal, adult-driven studio-made drama. It was made relatively inexpensively, with a budget of $25 million, and it marks a clear pivot for Affleck. He last year left behind Batman after several “Justice League” films. The standalone Batman film, once to star and be directed by Affleck, is instead being made by Matt Reeves with Robert Pattinson in the role.

“When I had the opportunity to direct and star in the Batman stand-alone movie, I realized I wasn’t passionate about it,” says Affleck. “My tastes have changed. I’m interested in different kinds of movies.” Upcoming films include the Patricia Highsmith adaptation “Deep Water” and “The Last Duel,” a medieval revenge drama.

Battles with alcoholism are never over, but they can get gradually easier to win. For now, at least, Affleck feels like he’s grown. He’s humbler. More honest. And closer to feeling free.

“I would not wish it on myself principally because of my children and because it has caused them pain, which I would give anything to change,” says Affleck. “But I can’t change the past. I can go from today. I can make sure today I’m good. That’s what I’ve got. I’m a guy doing good today.”