Ben Gish died 50 years ago; was inventor of roof-bolting 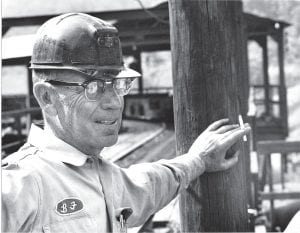 The late Ben F. Gish was photographed outside South East Coal Company’s Polly Mine in the early 1960’s. Gish, who developed the concept of roof-bolting in the 1920’s, died 50 years ago this week. (Photo by Thomas N. Bethell)

If you were to ask people living in the coalfields today when and where the concept of roof-bolting was invented and first put to use in a coalmine, only a very few might know the correct answer: In Letcher County about 90 years ago.

Ben F. Gish, who died 50 years ago this week, was the first in the coal industry to use roof-bolting to seal together rock strata to prevent roof falls. According to a story appearing in The Mountain Eagle after Mr. Gish’s death, he conceived of the idea to meet a specific problem in the early 1920’s in a South East Coal Company mine at Seco, where Mr. Gish had recently started what would become a long career as mine superintendent. He told an acquaintance years later that he thought of the method while looking at a large telephone directory and imagining a way to secure the white pages to the yellow pages.

Mr. Gish’s concept did not immediately catch hold elsewhere in the coal industry, but was picked up by ore mines in the west, where it was perfected and later adopted by the coal industry, making possible all ensuing mechanization of coal mines. 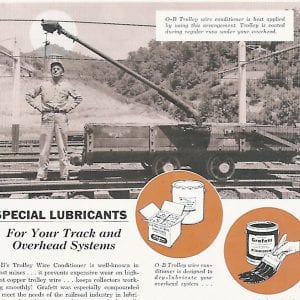 The late Ben F. Gish appeared in this advertisement for O-B Trolley Wire Conditioner that appeared in trade publications in the late 1950’s or early 1960’s. In the ad, he is seen standing outside South East Coal’s Polly Mine.

Mr. Gish was also the developer of a vacuum-cleaner technique to remove dust particles caused by drilling as a preventive against mine explosions and silicosis.

While Mr. Gish’s inventions earned him widespread acclaim in the mining industry, neither he nor South East Coal patented any of them.

A native of Muhlenberg County in western Kentucky, Mr. Gish came to Letcher County in 1917 with the development of the Elk Horn Coal Corporation mines at Haymond and Fleming. He joined South East two years later.

In her 2013 book “Family Dinner on Memory Lane,” Mr. Gish’s daughter-in-law Joyce Moreland Gish writes that Mr. Gish quit school after the fourth grade to go to work as a water boy in the coalmines in Muhlenberg County. He then followed in the footsteps of his father and became a brakeman on a train running between Madisonville and Hopkinsville.

Joyce Gish also writes that after Mr. Gish and his wife, Lucille Thomas Gish, moved to Haymond he was encouraged to “aim high” — advice he apparently took seriously as he worked his way up to the position of superintendent of South East Coal mines at Seco, Millstone and Polly. Mr. Gish held the job for 44 years until retiring six weeks before his death at age 67. He died in a hospital in Daytona Beach, Fla., on Nov. 11, 1963 after suffering a heart attack while mowing his grass, just three weeks after moving from Letcher County to Florida.

In addition to his role in developing roof bolting, Mr. Gish was also known for his work in supervising the mechanization of mines for South East Coal, which was one of the first companies in the nation to install modern mining machinery. While building up an industry-wide reputation in the field of mine safety and for coal production-per-man records, Mr. Gish and South East worked closely with the Joy Manufacturing Company as the Pennsylvania based company perfected its signature coal loading machines and later its rubber-tired shuttle cars.

Mr. Gish’s last major activity for South East Coal, which eventually closed after declaring bankruptcy in the 1990’s, was to design a plan for coal haulage and coal production for the firm’s then-major new mine at Polly in Letcher County. The plan was widely hailed within the coal industry as model and was adopted for use by other firms as they developed new mines.

Mr. Gish also served as a consul tant for the Stearns Coal and Lumber Company at Stearns and drew up a plan for reorganization and future development of that firm’s vast coal holdings in McCreary County.

In addition to his work in the coal industry, Mr. Gish was involved with several commercial business activities in Letcher County. Along with the late Wilson Renaker, he was one of the founders of the old Kyva Motor Company in the early 1920’s. Several years later he built and operated a service station and restaurant at Haymond with his wife and two of their sons, Frank and Bob, both of whom are also now deceased. Mr. and Mrs. Gish’s eldest son, Tom Gish, was editor and publisher of The Mountain Eagle until his death in November 2008. The couple also had three daughters — Louise, Belle and Juanita — all of whom have also passed.

Ben Gish was also related to the actresses Lillian and Dorothy Gish, sisters who were best known for their work with silent film director D.W. Griffith. Joyce Gish writes in her new book that Lillian Gish met with her and her husband Bob and told them that her grandfather and Mr. Gish’s grandfather were brothers.

“Bob told her we weren’t there to ‘claim kin,’” Joyce Gish writes. “After she asked (Bob) several questions about his father and grandfather she told him there was no mistake, they were related. We bought her book and she autographed it ‘to a member of the family.’”

Mr. Gish was also the first person buried at Green Acres Cemetery in Whitesburg, which was still under construction at the time of his death. He was a member of the Masonic Lodge and the Neon-Seco Methodist Church, for which he had served as chairman of the board.