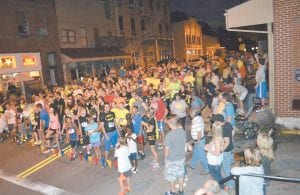 A “glow run” held in downtown Whitesburg Saturday night to raise funds for a couple adopting a child from Africa drew a larger turnout than organizers anticipated.

Byron and Amanda Thomas, of Whitesburg, initiated a threemile run and a one-mile fun run/ walk event as a fund-raiser for Jonathan and Reagan Berry, who are in the process of adopting Kona Martine, a one-year-old girl from the Democratic Republic of the Congo.

“When the Thomases mentioned the idea of having a race to help raise funds to defer the cost of the international adoption of our daughter we were humbled at their offer, but never did we expect it to be so well attended or so much fun,” said Jonathan Berry. “We are so thankful for good friends who care about us and truly care for orphans.”

Dr. and Mrs. Thomas had planned on having 125 runners and walkers enter the race, but total of 215 showed up.

“Honestly I am still in awe of how well it went and how many people came out,” said Amanda Thomas. “It is surreal that this little town showed up in such a big way.”

With the event exceeding expectations, the Thomases hope to make the 5K night race a yearly event with proceeds benefiting adoption or a different cause, said Mrs. Thomas.

“It was absolutely awesome,” said Craft. “There was such a feeling of camaraderie and enjoyment. It was fantastic. Everyone was so friendly.”

Craft estimated that 150 to 200 people gathered downtown to watch the race.

Many race participants — and observers — wore glow gear including necklaces, bracelets, headbands, glasses and wigs. Some dressed in costumes.

Brandy Baker, who teaches aerobics at the Letcher County Recreation Center, and her “boot camp” of 17 women and children wore Batman racing outfits. The team won the award for best costume.

Marcus Baker, a son of Brandy Baker and Letcher County Coroner Marty Baker, wore a neon-colored morphsuit, which posed a challenge for running. Upbeat music played on the City of Whitesburg’s speakers that line Main Street. City employee Chris Caudill, of Whitco, served as the emcee and kept the crowd enthused.

Named in honor of the little girl being adopted, the 5K-ONA Glow run started at 9 p.m. in front of Summit City and StreetSide Grill and Bar on Main Street. From there, participants turned onto Jenkins Road and past the Letcher County Recreation Center. Runners went through the Upper Bottom neighborhood while walkers bypassed that portion before returning to the start-finish line on Main Street.

Once the runners exited the Upper Bottom, they followed Madison Avenue to East Main Street, then ran along the old L&N Railroad bed to Long Avenue near Southeast Community College before turning off of Bentley Avenue to get back on Main Street.

At the conclusion of the race, runners and walkers received a free, warm donut from Here Comes the Bun Bakery.

The Berrys gained custody of Kona, whose name means “lady,” in May and hope to be able to bring her to Whitesburg by Christmas or the beginning of 2014. Kona turned one March 26.

The total cost to adopt Kona is about $28,000, which includes attorney fees, airplane travel, court costs and the foster mom’s salary.

All money raised from the 5KONA will go to the adoption fund for Kona.

“Reagan and I are completely overwhelmed by the outpouring of support for our family that was shown by this community Saturday night at the 5-K Glow Run to help bring our daughter home,” said Jonathan Berry. “We are so thankful for this city, its leadership, the loving community, and especially Byron and Amanda Thomas, who planned and organized the event with the help of many family members, friends, and local business sponsorship.”

First-place winners in each category are listed below:

• ages 14 and below, female Kasey Troutt and male Isaiah Bentley;