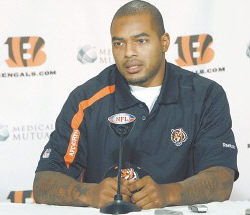 Larry Johnson might have his career up-and-running sooner than expected.

The running back who was banished from Kansas City for bad behavior signed on for a backup role with the Cincinnati Bengals on Tuesday, giving the AFC North leaders depth for the rest of this season. He might not be watching for long.

A day after coach Marvin Lewis referred to Johnson as an insurance policy in case of injury, he said it’s possible the running back could play in some form Sunday in Oakland if starter Cedric Benson is still limited by a strained hip.

Johnson has his own goal for getting on the field: Dec. 27, when the Bengals play the Chiefs at Paul Brown Stadium. That could set up the second get-even game for a Bengals running back this season. Benson was carrying a grudge when he ran for a career-high 189 yards against his former Bears team on Oct. 25.

Johnson is toting one, too.

“I’d be lying if I said I ain’t looking at that game as a game I want to definitely play in, but we take it a game at a time, one situation at a time,” Johnson said. “I’m just trying to get on the field as of right now. If that happens, it’d be the best Christmas gift I can get.”

The Bengals waived defensive tackle Orien Harris to open a roster spot for Johnson, who knew he’d be listed fourth on the depth chart to start.

“I have to work my way back up,” Johnson said. “You have to earn your stripes, literally, in the situation I’m in.”

The signing came eight days after the Chiefs let him go as he was set to return from his second suspension in the past 12 months. The Bengals are taking little financial risk by bringing Johnson in for the rest of the season — he could be released if he becomes a problem.

“He knows what’s at stake and at risk,” Lewis said. “He gets an opportunity to start anew, just like anyone would. He has paid a price for what’s gone on, things he’s said and done, and it came to a finality in Kansas City. And now it’s a new start.”

He got a second chance in Cincinnati, which has a history of providing them for troubled players. Owner Mike Brown brought Chris Henry back to the team before the 2008 season — over Lewis’ disagreement — and the receiver has stayed out of trouble since then. Henry is out for the rest of the season with a broken left arm.

When injuries decimated their group of running backs last season, the Bengals signed Benson to a one-year deal despite his two alcohol related arrests in Texas. The cases were dropped when grand juries declined to indict, and the Bengals offered a deal.

Benson has revitalized his career in Cincinnati — he ranks sixth in the league in rushing with 859 yards and leads the NFL with 205 carries, only nine shy of his career high with roughly half a season to go. His backup, Bernard Scott, is a rookie chosen in the sixth round from Abilene Christian.

Benson couldn’t finish an 18- 12 win at Pittsburgh on Sunday because of his hip injury, which gave the Bengals pause. The win left Cincinnati (7-2) in first place in the AFC North by a game, in position to make its second playoff appearance in the last 19 years.

Lewis has assured Benson he will remain the top running back. During an interview Tuesday with Sirius XM Radio, Benson sounded open to it.

“Yeah, I mean, well, you know, it’s good for him,” Benson said. “I was once in that position, and he’s getting his opportunity again. In all aspects we definitely plan on it to be a contribution to the team. If he can help the team in a positive way, then I’m all for that.”

Johnson turns 30 on Thursday, and his production has declined in recent years. The Chiefs let him go following several controversies.

He was benched for three games in 2008 by former Chiefs coach Herm Edwards for violating team rules, and the NFL added a game. He later was sentenced to two years’ probation after pleading guilty to disturbing the peace at a Kansas City night spot.

Three weeks ago, he posted a gay slur on his Twitter account and questioned the competence of coach Todd Haley, drawing a twoweek suspension. The Chiefs decided to cut ties with him rather than let him return.

“It was just a relationship that was souring,” Johnson said. “And in Kansas City being in kind of a small market, and knowing every little thing I was going to say was going to be blown up to mythical proportions.”