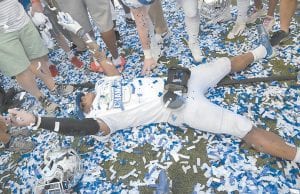 Two University of Kentucky football greats will be in Whitesburg next week for a presentation and autograph session sponsored by Appalachian Regional Healthcare.

Benny Snell Jr., UK alltime leading rusher, and Tim Couch, former quarterback for the Wildcats and for the Cleveland Browns in the NFL, will be at the CANE Kitchen in the old Whitesburg High School at 12:30 p.m., March 12.

The event is sponsored by ARH Cardiology Associates and the Gill Heart and Vascular Institute at UK. 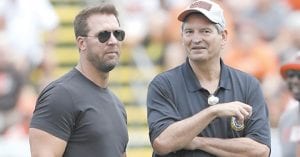 Snell, who is entering the NFL draft in April and foregoing his senior college season, is one of only four players in Southeastern Conference history to have three 1,000-yard rushing seasons consecutively, and only UK player ever to have consecutive 1,000-yard seasons. He broke a 43-yard school rushing record held by Sonny Collins when he carried the ball 12 yards for a touchdown against Penn State during the 2019 Citrus Bowl.

The Citrus Bowl trophy will be at the event next week for viewing and photo opportunities.

Couch, a native of Leslie County, played five years in the NFL at Cleveland after a stellar career at UK. Couch split the starting quarterback position with Billy Jack Haskins his freshman year under Coach Bill Curry. Curry was replaced after one year, and Couch came into his own with Coach Hall Mumme’s “air raid” strategy. While in college, Couch completed 795 of 1,184 passes for 8,435 yards, with 4,275 passing yards during the 1998 season alone and 74 touchdowns including a 97-yard touchdown pass.

The event in Whitesburg on Tuesday will include a short presentation by Snell, followed by an autograph session with Snell and Couch. The first 50 people to arrive will get a free signature football to be signed.