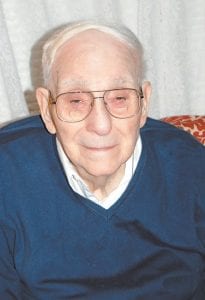 Funeral services will be held Saturday for the former owner of Royal Crown Cola Bottling Company in Ermine.

In the 64 years of owning the bottling company, Bentley showed up for work nearly every day until the company was sold in November 2011. He signed paychecks at 96.

Charlotte “Lottie” Hampton, who worked as the bookkeeper and secretary of the business for 48 years, said Bentley didn’t tell someone to do something. Instead, he showed them how.

When the plant still bottled drinks, Bentley arrived at work at 4 a.m. to fire the furnace so the water would be hot enough to clean and sterilize the glass bottles when workers arrived.

Before partnering with the late Ray Collins to buy the bottling plant in 1947, Bentley owned the Big Block Coal Company on the Little

Colly side of Sandlick Mountain. Bentley and Collins, an Old Regular Baptist preacher and businessman, bought the plant, then located in Neon, from James McAuley and formed The Royal Crown Bottling Company of Whitesburg Inc.

After taking over a plant with an inventory consisting of less than a pallet of the lemon-lime drink Upper 10 and one pickup truck that had been hit in the rear, Bentley sold his coal business in 1948 and moved the bottling plant to Ermine, where they built a brand new facility with new equipment. Collins sold his share of the business to Bentley in 1965.

In its heyday, the plant produced and bottled RC Cola, Diet Rite Cola, Nehi Peach, Nehi Grape, Nehi Orange, Nehi Root Beer, Upper 10, and RC 100. Between 2,000 to 2,500 cases of 12-ounce bottles and 1,500 to 2,000 cases of 16-ounce bottles of soft drinks were produced each day until 1990, when Bentley decided to stop bottling all products because the market was moving toward plastic two-liter bottles and aluminum cans.

Bentley employed 70 workers — 26 who manned routes to deliver his products throughout the region. Demand was so high that Bentley built warehouses in Hazard, Pikeville and Wise, Va., as well as three- and four-bedroom houses for employees to live in and run the warehouses. He also furnished trucks for them to drive. He had bottling plants in Jackson until 1965 and in Paintsville until 1974.

In 1960, Bentley came up with the idea of a well-known billboard that says, “Welcome to Whitesburg, Ky. Population 1,534 friendly people plus two grouches.” People have speculated for years about the identity of the grouches, but Bentley insists the billboard isn’t referring to anyone in particular. The sign is located on Tunnel Hill at Whitesburg near the back entrance to Whitesburg Appalachian Regional Hospital.

Bentley bought a large Christmas decoration while attending an RC Cola meeting in Chicago in the 1960s. Santa, a sleigh and reindeer were on display near the RC plant for more than 50 Christmas seasons.

Ronnie Bentley had helped his father at the plant since he was nine years old by carrying wooden shelves for workers to fill with full bottles. After graduating from Eastern Kentucky University, Ronnie Bentley was drafted into the armed forces in September 1961. He served two years and came back to home to work with his father. He worked at the RC plant until it closed in 2011.