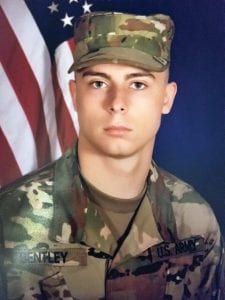 Mr. Bentley enlisted in the U.S. Army Reserve on March 22. While in basic he was promoted to E-2/ pv2. He will be attending advanced individual training this summer at Fort Lee, Virginia, where he will be trained as a ammunition specialist. He then plans to attend Eastern Kentucky University, where he plans to study criminal justice and ROTC. His goal is to become a commissioned officer in the U.S. Army.

A member of the Honors Society, Mr. Bentley participated in the HOBY (Hugh O’Brian Youth Leadership) program at EKU, and was recognized by the University of Kentucky as a “rising scholar.” Mr. Bentley has also been awarded the WYMT-TV mountain basketball scholarship to be given on December 4.

He is currently a senior at Jenkins High School, where he was a captain on the Cavaliers football team, and attends the “dual credit” program at UPike.

Mr. Bentley in the son of Roy Bentley II of Payne Gap and the late Lydia Bentley.