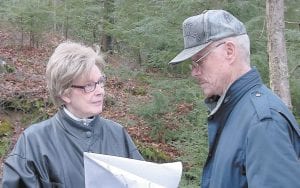 The Cornetts were honored in a ceremony earlier this month.

Berea College has presented its 2013 Distinguished Alumni award to Dean and Nina Cornett of Blackey.

The award presentation was held Nov. 8 in the Baird Room of the Berea College Alumni Building.

Mr. Cornett is a native of Blackey. Mrs. Cornett grew up in southwest Virginia and West Virginia. The two were honored for both their career achievements and for their environmental contributions, as well as for their long involvement with Berea College students and projects.

Mr. Cornett is a videographer and video- documentary producer. One of his recent documentaries, American Chestnut: Appalachian Apocalypse, which covers the history of the American chestnut and the early- twentieth- century blight that virtually wiped it out, has been airing on Kentucky PBS channels.

Mrs. Cornett is a former Deputy Assistant Secretary of the Navy. During her tenure, she was responsible for overseeing automation projects for US Navy ships and managed a $2 billion annual budget. She is also the author of Alaska Summer, a novel published in hardcover by Avalon books and in paperback by Dell Publishing. She has also researched and written scripts for her husband’s documentaries, including American Chestnut. She is presently working on a memoir and is in the beginning stages of development for a mystery novel set in Alaska.

The Cornetts have worked on a long list of local projects, including converting a one-acre trash dump into a park in Blackey, and helping establish a medical helicopter service to serve Letcher and surrounding counties.