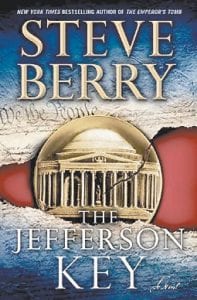 The cover of Steve Berry’s “The Jefferson Key” is shown. (AP Photo/ Ballantine)

Malone and his new girlfriend, Cassiopeia Vitt, are hoping to enjoy a romantic weekend in New York City when an email from his former boss sends him to a hotel to meet with her.

He arrives inside the room to find nothing but a weapon aimed across the street at another hotel. He looks out the window and watches as the president of the United States gets out of his limousine. Bullets start flying.

How can he prove his innocence when so many witnesses saw him? The answers he seeks can be found in a clause of the U.S. Constitution and the benefi- ciaries of that particular law. These men have assassinated previous presidents to maintain their grip on power.

Berry builds on actual historical facts to create a no-holds- barred thriller guaranteed to increase the pulse of the reader. The result educates without being dull. The climax gets a bit silly at times, but that is a minor quibble.

Readers who enjoy nonfiction history tomes will find as much to enjoy in “The Jefferson Key” as those seeking a roller coaster story line.

Berry should be required reading for Dan Brown fans as well.