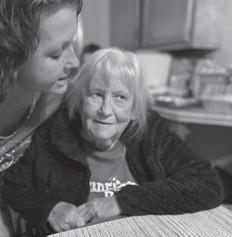 Bertha Turner, of Linefork, celebrated her 80th birthday on January 18. Her daughter, Glenda, from Alabama, surprised her mother with an early visit and a small party for her birthday. Mrs. Turner’s favorite group, Sunrise Ridge Band with Shawn Stamper, Whitney and Jack Adams, performed.

For those who wanted a white Christmas, you got your wish. We did get a little snow in the Ohio Valley area Christmas Day, and it was gone.

What I see on the computer is eastern Kentucky could be still celebrating Christmas as they have snow almost every day.

Here it is the middle of January, and I finally decided to take my Christmas tree down. I really thought about leaving the tree up all year. At the present time I have the decorations off the tree laying in small bunches to put in the container.

I purchased a fake tree just before Christmas, and my son Keith Ballard made a beautiful box to hold it. I am going to put a string of clear lights on it. That is, if I ever get the Christmas tree down.

Once again I will say I pray all my readers are safe from this horrible pandemic known as coronavirus, COVID 19, etc.

I find it is very difficult to keep my thoughts to myself, as our world as we have known it, ended almost a year ago with the virus, then everything else that has followed through this year.

I will repeat how I wish things were as simple as they were as a child growing up in that tiny spot called Roxana, Kentucky. We had the innocence of being young, also we had no television so we knew nothing of the outside world.

During conversations with Ann Calihan, we will let our thoughts travel back in time. Actually Ann is the only person I know that I can talk to about different things as she still remembers the same.

Before you get your dander up, I am not writing this to be rude nor mean any offense to anyone,

I think I was almost 13 years old before I ever heard the word pregnant! While growing up, to describe a woman pregnant, you heard someone saying she is with child, going to have a baby. If someone wanted to be nasty, well she is big again!

Another word I have heard and I almost have to laugh at this, however it is true. If someone called you a cow, that was a fighting word.

Nowadays, the f-bomb is used as if it is the greatest word in the dictionary, used in front of children, by the children. Actually some children know more than I do, thanks to all the technology

Again, I will say I wish things were back to the simplicity as of growing up in that little backwoods time in the mountains of eastern Kentucky for thirteen years I called home.

By the grace of God, I made several mistakes in my growing-up years. I have paid a price, however when I think back of my growingup years I didn’t turn out too bad.

I will always regret I was lost between the cracks of the Letcher County School System. There wasn’t an opportunity for education for me.

I’ve often said I wish I had the money to start a trust fund for some girl to help with college. No, I am not meaning a girl is more important than a boy. I know I will never have the money, however I hope someday I can stress the fact of the importance of education.

I am so thankful two of my granddaughters,, Sarah and Jessica Nottingham, each received four-year completely paid scholarships from Northern Kentucky University.

I was so pleased to know there are venues that will help young and old alike to get help with education right there in Whitesburg, as there is a college in the old Coca Cola building.

I know years ago there was Stuart Robinson. When I was young, I knew nothing about places that would help.

I took the high road, started babysitting and staying with older people doing home health care, which I absolutely knew nothing about. Finally marrying and starting a family of my own, then I somehow got lost in the shuffle. I became a mother and a wife, losing my own identity.

Here I am. So many years have gone by, my children are grown, I have grandchildren and great-grandchildren, and the lack of education still haunts me.

I’ve always known I could take care of myself, however I couldn’t take care of four children without a good job, which I had no education to get.

After a long and lengthy divorce I worked almost day and night to survive without asking for help. I did it my way.

I was once called Rebel Rose, which I guess is true. I just didn’t stand my ground too much when my kids were little. Oh, once in a while I did, however it took a few years for me to grow up, and grow strong.

My health is failing now, however a way was made for me that I have it a little bit easier financially , except with this Monster Virus that is stealing our freedom, there’s no place safe to go.

Once again, please keep Johnny and Ann Calihan in your prayers. Things have improved. Prayers do work.

Hello Les and Pat Wagner. We are getting closer to spring, and I bet you are thinking about getting the garden ready.

My daughter Anna Nottingham found Black Seed Simpson Lettuce seed for me. Now I don’t have to worry about finding it. Last year someone said they would share some seed with me, which didn’t happen. Nina Craft was kind enough to send me a pack of lettuce seed. It was a different type, still it was good.

Keith purchased some different of tomatoes. They weren’t a name that I recognized. Yes, it makes a difference. These tomatoes produced well, however it was a small tomato. They were very good. Keith planted the tomatoes in three pots on the back patio.

I sowed lettuce in a wheelbarrow. Keith placed a window over the top, and lettuce was growing right up till Christmas, then strong winds came at night, which overturned the wheel barrow and the lettuce froze.

Mike and Marcia Caudill, as I see the pictures of the mountains on the computer I think of the road leading to your house. I bet it is beautiful.

Oh, how I want everything to return to normal so Carcassonne Community Center can open, along with Campbell’s Branch.

Occasionally a square dance will pop up in my Memories on Facebook. I enjoy this immensely, as I am thankful for the memories.

As I watch the videos I wonder about the people. I was always too be busy dancing, and I never took the time to get acquainted with everyone.

Welcome to our new President Joe Biden, and our Vice President Kamala Harris, the first woman to hold this position. I’ve always hoped I would see a woman President before my journey called life is over. I think I may take my email address off, as the last time I mentioned politics in my column it upset a reader. Oops, old Mitch McConnell finally got what was coming to him

Well it is getting late so I have a busy day ahead of me.