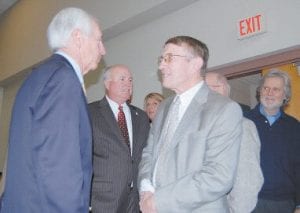 Governor Steve Beshear was in Letcher County last week to present the City of Jenkins with a $750,000 check for a water project he and Jenkins Mayor Charles Dixon agree “is desperately needed.””Currently, there’s a high percent of water loss and low water pressure due to the frequent breaks in the lines,” said Beshear. “These breaks also lead to cross contamination which is a serious threat to health and safety and can result in boil water advisories.”

Beshear, who also awarded a $30,000 grant to the Letcher Fiscal Court during his April 23 visit, said he understands how Dixon feels “to be able to get something like this when it is so desperately needed.”

Dixon said replacing waterlines is “something that is desperately needed to help our infrastructure.”

“If we are ever going to grow, that is something we need to do,” said Dixon.

Beshear was amazed to hear that some of the 100-year-old waterlines in Jenkins are made of wood.

“Did you say wooden waterlines?” asked Beshear. “We know what happens when you don’t have the money to do anything with lines like that. We need to upgrade them.”

The project also calls for the replacement of 15 fire hydrants.

“The water project consists of the replacement of more than 3,500 linear feet of water lines,” said Beshear. “These improvements will enhance the overall pressure, the supply and the quality of the water for more than 1,000 water customers.”Beshear said Dixon and the city council had really gone after funding for the water project and worked very hard to receive the grant.

Dixon said Jenkins lost 72 percent of its treated water last month because of the outdated waterlines.

“The water crew is always out working on a leak somewhere,” said Dixon.Dixon said he hopes work on the project can begin within the next six months. Once the project starts Dixon said the 100-year-old wooden waterlines going from Jenkins Lake to the water plant will be the first lines to be replaced.

“We’re hoping to correct as much as possible,” he said.

Dixon said as much work as possible will be done with the grant money and then the City of Jenkins will apply for more funding to finish the rest of the project.

“Making this investment for the City of Jenkins is something that pleases me to no end and makes me happy to be able to help about 1,000 people or more that receive these services,” said Beshear. “Things are in short supply but even when the economy is like it is we have got to continue to make strategic investments in order to improve the quality of life for our people.”

Beshear also presented $30,000 to the Letcher County Fiscal Court. The State Homeland Security Grant (SHSG) grant will be used to purchase radios for police departments and hazardous-materials responders.”It’s small things like good communications that make all the difference in the world whether they are successful or not — whether your lives and your safety are protected or not,” said Beshear.

The current equipment is eight years old and does not meet a digital radio standard, known as P-25, designed to ensure that different agencies can communicate back and forth with each other.

Beshear said he is working with the department of transportation to improve road conditions in Letcher County.”One of the projects that we’re working on here in Letcher County is (relieving) the congestion and improving safety on KY 15, and work has begun on improvements to the valley floor area of US 119,” said Beshear. “While we’re facing difficult economic times we have got to continue making these kinds of investments.”

Beshear said he is proud to be a friend of Letcher County.

“Having a friend in the governor’s office is good for all of us,” said Letcher County Judge/ Executive Jim Ward. “If you call his office, you get a response.”

“The county judge, the fiscal court, the mayor, the city councils work so hard,” said Beshear. “I have all kinds of friends here like the Richardsons (Bill and Josephine of Whitesburg) and others who I have known forever and they have all educated me about Letcher County and the good people of Letcher County and the good quality of life here that we could make even better by doing small investments like we are doing here today.”