Beshear is sworn in in private ceremony 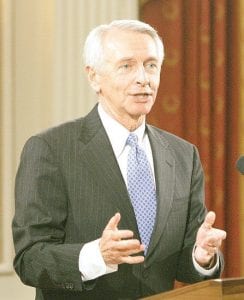 Steve Beshear was sworn in as Kentucky governor in a private midnight ceremony in the Executive Mansion, completing an unlikely political comeback 20 years after he last held an elective office.

After losing his first attempt at the job in 1987, Beshear had given up aspirations of becoming governor. However, the Lexington attorney made an unplanned return to Kentucky politics earlier this year, jumping into the governor’s race after trying unsuccessfully to persuade other prominent Democrats to run.

“This is a prime example of how strange things happen in life,” Beshear said after being sworn in early Tuesday. “We’re going to face some challeging times in the days and months ahead but, my friends, I will tell you right now, we’re going to be successful.”

Joe Gershtenson, director of the Center for Kentucky History and Politics at Eastern Kentucky University, said Beshear pulled off a remarkable feat by returning to state politics after such a long absence.

Beshear, surrounded by his family, was sworn in by Supreme Court Justice Bill Cunningham as the state’s 61st governor. With his hand on a white family Bible held by his wife, Jane, Beshear repeated Kentucky’s traditional and archaic constitutional oath. In addition to a customary vow to uphold the law, the oath required Beshear to swear that he has never fought a duel with deadly weapons ¿î a holdover from Kentucky’s frontier days, one that drew snickers from the 120 people invited to watch the ceremony in the mansion ballroom.

Newly elected Lt. Gov. Daniel Mongiardo was sworn in with the same oath by Court of Appeals Chief Judge Sara Walter Combs immediately afterward with his fiance, Allison Patrick, at his side.

Brig. Gen. Edward W. Tonini was also sworn in as adjutant general for the Kentucky National Guard, a move that satisfies a constitutional mandate that the job never go unfilled.

Beshear previously announced Tonini as his choice for adjutant general. He already has named several other people to fill key positions in his administration.

After a worship service at 8 a.m. Tuesday and an inaugural parade that at 10 a.m., Beshear was to be publicly sworn in by Supreme Court Justice Mary C. Noble at 2 p.m., after which he was to deliver an inaugural address outside the Capitol.

Beshear, 63, has said he thought his political career was over long ago. But he reconsidered at the urging of friends and political advisers. He went on to win a crowded Democratic primary in the spring and later toppled incumbent GOP candidate Ernie Fletcher in a lopsided victory.

Fletcher, who was the first Republican elected Kentucky governor in more than 30 years, had been politically weakened by an indictment charging that he rewarded politically connected Republicans with jobs at the expense of Democrats.

The son of a Baptist preacher, Beshear climbed the political ladder in the 1970s and 1980s as a state lawmaker, attorney general and lieutenant governor. He lost in his first run for governor in 1987, then failed in a 1996 run for the U.S. Senate.

After that, he had faded from the political scene.