Beshear reaches out to top lawmakers 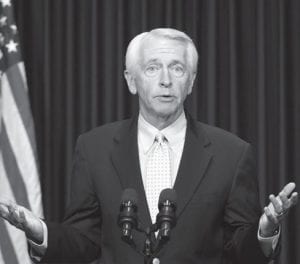 Beshear has said he will call lawmakers back to the Capitol for a special session later this spring to have them finish work on a budget for the fiscal year beginning July 1.

The special session, coming in an election year, will cost taxpayers about $64,000 a day.

In his letter to House Speaker Greg Stumbo and Senate President David Williams, Beshear recommended that the three meet as soon as possible to set up a process to end the deadlock.

Beshear said it had appeared that the House and Senate were very close to a budget deal before the General Assembly’s 60-day session ended last Thursday.

“I call upon you to not waste the hard work that has already been done, to pick up where you left off and resolve the short list of outstanding issues,” Beshear wrote.

More ominously, Beshear said he would need at least one month to prepare state government for a partial shutdown if lawmakers are unable to agree on a new budget before July 1.

“We hope we won’t reach the point of making those decisions because we — and the state’s taxpayers — expect that the General Assembly will enact a budget in the upcoming special session,” Beshear said in a separate statement.

Beshear added that his staff was reviewing a state Supreme Court decision to determine how state operations would be affected if the state has no new budget by July 1.

Williams and Stumbo did not immediately respond to the governor’s letter.

Williams, R-Burkesville, said last Friday that the Senate will insist on a twoyear budget that avoids both higher taxes on business and a big increase in the state’s debt load.

The governor’s letter also said that a budget deal must be reached before June 1, or the state will lose the opportunity to save $113 million for the general fund and $64 million in the road fund by refinancing debt.

Beshear has said that without the assurance of a state budget for the next fiscal year, the refinancing cannot be taken to the bond market.

The Senate passed a $17.3 billion two-year budget last month that called for deeper spending cuts to almost all state agencies than the House’s $17.5 billion version.

Lawmakers faced the diffi cult task of overcoming a $1.5 billion shortfall amid a sluggish economy and high unemployment in trying to write a budget.

In his letter, Beshear pointed to documents detailing each chamber’s understanding of the status of negotiations when the talks broken down.

Beshear suggested using those documents as a “jumping off point” for future discussions.