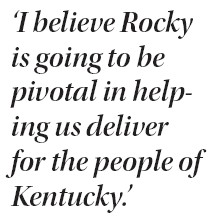 The latest round of personnel decisions included an expanded role for Lt. Gov.-elect Jacqueline Coleman.

Coleman will take on the dual role of secretary of the Education and Workforce Development Cabinet, Beshear said. In another key hiring, ex-Lexington Mayor Jim Gray will serve as state transportation secretary.

The incoming governor, who takes office Dec. 10, filled two other positions this week.

They bring experience and expertise, along with other important intangibles, Beshear said.

“They treat others with respect and decency,” he said at a statehouse press conference. “They have humility. They are the exact type of leaders who are going to set the exact type of example that I was looking for. They’re in it for the right reasons, to make our state better for all Kentuckians.”

Since winning last month’s election, Beshear has stressed the need for civility during an era of divided government in Kentucky. Beshear, a Democrat, will face a Republican-dominated legislature that must craft a new two-year state budget after it convenes in January.

Adkins said this week he’ll be “in the middle” of the action in his new role in the governor’s office. He said he anticipates working closely with lawmakers in promoting Beshear’s agenda, which includes strengthening public education, providing affordable health care and repairing roads and bridges.

“I believe Rocky is going to be pivotal in helping us deliver for the people of Kentucky,” Beshear said.

It strengthens a partnership that formed after a stretch as competitors. Adkins finished second behind Beshear in the Democratic gubernatorial primary in May. During the fall campaign, Adkins played a high-profile role in promoting Beshear, especially in eastern Kentucky.

Adkins’s new job ends speculation about a possible U.S. Senate bid next year. He was seen as a possible candidate for the seat held by Republican Senate Majority Leader Mitch McConnell, who is seeking reelection.

Coleman, meanwhile, said she wants to make “real, impactful” changes to improve education outcomes for all children in her role as education and workforce development secretary.

“Strengthening our public education system is without a doubt the most important, the most moral thing we can do for our children and families in this commonwealth,” she said.

Meanwhile, Gray returns to public service less than a year after concluding his tenure as Lexington mayor.

Beshear said his incoming transportation secretary was known “for getting things done” as mayor of Kentucky’s second-largest city. Gray also will tap into his experience as top executive at a large construction company. He promised to run the Transportation Cabinet with integrity and transparency.

As adjutant general, Lamberton will draw upon his long experience in military service — 14 years in the Army and 21 years in the Kentucky National Guard. His service included commands from platoon to brigade level and multiple overseas deployments.

Jackson, who will serve as veterans affairs commissioner, had a 27-year military career in the U.S. Army Reserves and was deployed to Iraq in 2005. He is a former Lexington fire chief.