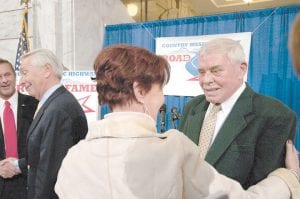 Country music great Tom T. Hall is touting his home state and the talent in communities along an eastern Kentucky highway that have produced some of Nashville’s top stars.

Hall gushed about Kentucky producing the best bourbon whiskey, fastest horses and most beautiful women, a spin on lyrics to one of his best-known songs.

But “The Storyteller” also bragged about the talented musicians in promoting the Country Music Highway Road to Fame talent contest that begins next month to showcase the musical abilities of eastern Kentuckians.

The announcement made at the State Capital introduced the “Country Music Highway Road to Fame” talent competition which will allow the discovery of the next generation of talented artists from the area, as well as the development of a charitable organization, the “Country Music Highway Arts Education Fund” which will support music programs in Kentucky schools and aid children in discovering a passion for music without utilizing state education funds.

“I am certain that Governor Beshear will agree with me when I say how proud we are to honor the rich musical heritage springing from the State of Kentucky,” said Jeff Crowe, President and CEO of Tour SEKY. “Our youth is teeming with musical talent and I am excited to see the impact the program will have upon them.”

The “ Country Music Highway Road to Fame” competition, set to begin in mid-March, will tap eastern Kentucky’s musical roots to find the next generation of talent. The winner of the 2012 “Road to Fame” competition will receive a scholarship to participate in career development and coaching under the direction of PCG Nashville valued at $25,000, an acoustic guitar and a plaque recognizing their achievement.

The contest will be open to aspiring artists 13- 35 years of age from Letcher County and 14 other counties that border the Country Music Highway. Details of the contest will be released on the “Country Music Highway Road to Fame” website. Potential contestants and interested parties should visit www.cmhroadtofame.com and register to receive announcements as they are made.

“I’m really excited about the competition because it will show that some of the best talent can be found in the hills of eastern Kentucky,” said Hall about the talent residing in his home area of Kentucky.

“ The Country Music Highway means so much to me. I grew up in that special part of Kentucky, as did so many of my friends who have also been fortunate enough to find careers in country music. And now the Country Music Highway folks have launched a great project they’re calling “The Road to Fame,” said Naomi Judd in an earlier statement. “Keeping music alive on stage and in schools is close to my heart. I encourage everyone to get behind this project. Please join me in supporting the “Road to Fame” and the difference it will make in the lives of our friends and neighbors.”

On March 1, 1994, a bill sponsored by State Representative Hubert Collins was passed and US Route 23 in eastern Kentucky became “The Country Music Highway” to recognize the famous Country music stars that came from the region.

The 144-mile road is also recognized as a National Scenic Byway.