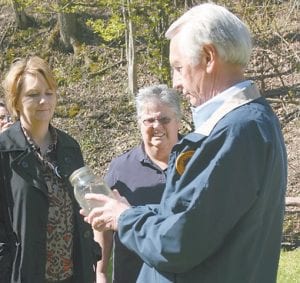 Members of Kentuckians for the Commonwealth show Gov. Steve Beshear a sample of water they say has been destroyed by poorly regulated mining in eastern Kentucky.

Kentucky Governor Steve Beshear, accompanied by Energy and Environment Cabinet Secretary Len Peters, met last week with residents in eastern Kentucky to see and hear first-hand about the importance of protecting their water, opportunities for community development, and problems the residents say are associated with mountaintop removal coal mining and valley fills. The tour was hosted by members of Kentuckians For The Commonwealth.

The Governor’s visit made good on an earlier commitment to visit the region and learn about the impact of surface mining on health and water. Floyd County residents Rick Handshoe and Sister Kathleen Weigand took him on a tour of several locations in Floyd County where they told Beshear pollution levels in streams below mine sites are more than three times the allowable standard set by the U.S. Environmental Protection Agency. The Governor observed while water quality tests were taken in both a healthy stream and streams degraded by coal mining operations. Handshoe also showed the governor a sediment pond below a valley fill near his home that is contaminated by acid mine drainage.

“ What you’re seeing here is just one example of a much larger problem. It’s happening all over,” Weigland told Beshear.

Handshoe added, “Governor, this is a people issue; it’s a human rights issue. Our groundwater around here was contaminated by deep mining a long time ago. You just can’t allow our surface waters to be destroyed too.”

Later on the afternoon of April 7, Governor Beshear and Secretary Peters attended a meeting hosted by KFTC members in the Harlan County community of Lynch. Residents shared ideas for economic development and a sound future for their area, and called on the Governor to block two proposed surface mine permits that now threaten their drinking water and quality of life.

“I’ve lived here all my life,” shared Carl Shoupe, a retired third generation coal miner from nearby Benham. “This is a special place with an important history. We have good, pure water that flows out off Black mountain. With a lot of work by a lot of people, we’ve built up some fine tourism sites, like the School House Inn and Portal 31 exhibition coal mine. But all of those things could be lost if the state allows these strip mines to go forward.”

Stanley Sturgill, a resident of Lynch and retired coal miner and federal mine inspector, thanked the governor for his time and asked him to take a stand. “Will you declare your support for designating key areas around Benham and Lynch as ‘Lands Unsuitable for Mining,’ and will direct your Energy and Environment Cabinet to revisit and reverse their recent ruling on this matter?” Sturgill questioned. The Governor responded that his administration would carefully review all permits and “take the concerns we’ve heard today under consideration.”

Governor Beshear later stated, “I’m convinced that if we are smart and enforce our regulations, we can mine coal and protect the environment. It’s something we have to balance.”

To which Sturgill countered, “Governor, what you saw up there in Floyd County today, would you consider that balanced just right?”

“I’m thankful that Governor and Secretary Peters came and listened,” KFTC member Doug Doerrfeld said. “This is just a first step, and it’s good that he agreed to meet with us again soon. There are many issues left to be resolved. The whole conversation needs to go much deeper, and we need to see concrete action.”