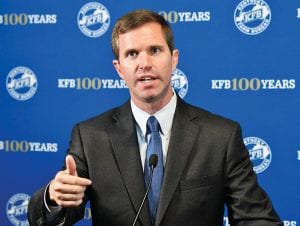 A lifetime lobbying ban, he said, would end a “revolving door” in which exlegislators lobby former colleagues on behalf of special interests. Under state law, lawmakers now have to wait two years after leaving office before registering as legislative lobbyists, unless it’s for a public agency.

Beshear’s ethics plan also calls for strengthening financial disclosures — including requiring governors and candidates seeking the office to release their tax returns. Bevin, his opponent in November, has declined to reveal his tax returns.

“Kentuckians deserve to have confidence in our elected leaders,” Beshear said in a release. “Our people should know that Frankfort is working to solve the challenges they’re facing — not furthering the selfinterests of lobbyists and insiders.”

House Minority Floor Leader Rocky Adkins, the chamber’s top- ranking Democrat, said he supports much of Beshear’s plan but parted ways with his exrival on limiting lawmakers’ time in the legislature.

“One area where I disagree is term limits, because that decision should be left in the hands of voters,” Adkins said in a statement. “The House is a good example of that in action, since about half of the 100 members are serving in their first or second term.”

Adkins, a longtime legislator, finished second to Beshear in the May Democratic gubernatorial primary.

Kentucky has a history of corruption in state government, but ethics issues haven’t been at the forefront of the hard-fought gubernatorial campaign.

His plan also calls for all candidates for state office, senior-level appointees and Cabinet members to complete the same personal financial disclosures required of federal candidates. That would include disclosing every business a candidate has a financial interest in, along with every investment and property transaction they have made.

Another proposal would restrict pay raises for Cabinet appointees. Under the plan, such pay raises could go into effect only during the next governor’s administration. Beshear referenced a $215,000 salary increase the state’s chief information officer, Charles Grindle, received from Bevin.

Bevin and Grindle served together as Army officers years ago. The governor has said taxpayers are getting “a steal” with the higher salary, pointing to Grindle’s experience.

The ethics plan is the latest major policy proposal unveiled by Beshear since winning his party’s nomination. He recently released a plan to improve job opportunities for military veterans.

“Kentuckians can’t trust a word Andy Beshear says,” Lonergan said in a statement. “If he wants real ethics reform, he should start with his own office.”

Longmeyer was sent to prison in 2016 for a kickback scheme that netted him more than $200,000. He previously worked in the administration of former Gov. Steve Beshear, who is Andy Beshear’s father.

Federal authorities have said that neither Beshear had knowledge of Longmeyer’s crimes.