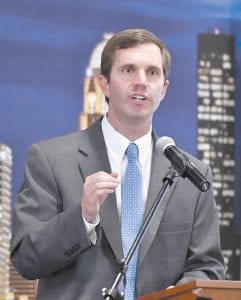 Promoting an issue his father unsuccessfully championed as governor, Democrat Andy Beshear said he wants to expand gambling in Kentucky and use the proceeds to help fund the state’s struggling public pension systems.

Beshear, one of four Democrats seeking their party’s nomination for governor, was asked at a campaign event last week how he would fix the state’s pension woes. His reply to the Louisville audience — look for new forms of revenue “that don’t raise anybody’s taxes.”

“I’m for expanded gaming, and it’s time we get it done,” he said, adding he supports allowing casino gambling and sports betting.

Two of his rivals for the Democratic gubernatorial nomination later expressed doubts about the plan.

“To talk about an unrealistic proposal that he knows doesn’t have a chance passing, I think, is not being truthful to the people of Kentucky,” state House Minority Floor Leader Rocky Adkins said afterward.

Former state Auditor Adam Edelen said expanding gambling is the “right thing” to do, but said it won’t solve the state’s revenue needs.

“We have to be careful not to just make promises to people because they’re easily consumed,” he told reporters at the event. “Expanded gaming is a nobrainer, but we haven’t been able to get it done in Kentucky. And putting all our eggs in that basket seems … to be an irresponsible gamble.”

For years, expanded gambling proposals died in Kentucky’s legislature despite the state’s revenue needs — even when Beshear’s father, former Gov. Steve Beshear, took the lead in pushing the proposals. This year, a proposal to legalize sports betting in Kentucky also failed in the legislature.

Asked how he could make expanded gambling a reality in Kentucky when his father and other supporters couldn’t, Andy Beshear told reporters: “What they’ve never done is tie 100% of the proceeds of expanded gaming to our pension system.”

Kentucky, which has one of the worst-funded public pension systems in the country, could reap up to $500 million a year by legalizing expanded gambling, said Beshear, the state’s current attorney general. Much of that money now flows to other states where Kentuckians gamble at casinos, he said. An influx of gambling revenue would free up state funds for education and health care, he said.

Meanwhile, all three Democratic candidates speaking at the event said they would support efforts to revamp the state’s tax code.

Adkins told reporters he would support efforts to eliminate outdated tax exemptions as a way to generate additional revenue, but would do so in a way that wouldn’t hurt businesses or industries.

“I think we ought to look at some of those exemptions to see if they’re still working,” the veteran lawmaker said.

Edelen said the state needs to modernize its tax code, but said that to accomplish it, a plan would need to be connected to specific investments — such as expanded broadband access and early childhood development.

“It’s never going to happen until we connect it to real investment,” Edelen told reporters.

The other Democrat running for governor in the May 21 primary is frequent candidate Geoff Young. Bevin’s GOP challengers in the primary are state Rep. Robert Goforth, William Woods and Ike Lawrence.