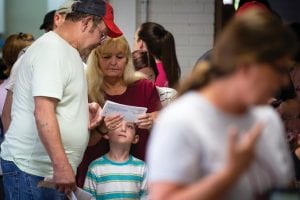 In this July 15, 2019 file photo, Darrell Raleigh (from left), Donna Raleigh and their grandson, Daniel Lowe, 5, look over their utility bills as they wait in the Holy Trinity Church in Harlan, hopeful of having their electric bills paid for by the Catholic Church. Father Jim Sichko handed out more than $20,000 to miners who are struggling to pay bills after the coal company they work for filed for bankruptcy protection. This was one of the top stories in Kentucky in 2019. (Alton Strupp/Courier Journal via AP)

Democrat Andy Beshear’s election as governor, settling one of Kentucky’s most epic political feuds, has been voted the top news story of 2019 in the Bluegrass state.

Beshear overcame the state’s strong GOP leanings to oust Republican Matt Bevin in the November election and make history as the first son of a Kentucky governor to win the seat himself. His father, Steve Beshear, served two terms preceding Bevin’s time in office.

Andy Beshear’s narrow victory — aided by Bevin’s combative style that alienated many Kentuckians, including teachers — settled a bitter rivalry. As attorney general, Beshear sued Bevin repeatedly to challenge some of his executive actions. Beshear’s election was the overwhelming choice as the year’s top news story in the annual Associated Press poll of editors, news directors and reporters.

Second in balloting was the Bevin administration’s investigation of teacher protests. The state Labor Cabinet demanded that several school districts turn over the names of teachers who called in sick to protest at the state Capitol during the legislative session. In some districts, so many teachers called in sick that schools closed due to the lack of enough substitutes to cover classes.

Bevin’s administration said the investigation found more than 1,000 educators violated state law by participating in protests that shut down schools, but no penalties were assessed.

The third-place story was the post-race drama at the Kentucky Derby. Maximum Security was the first horse across the finish line in the 145th Derby but was later disqualified. The Churchill Downs stewards determined after a race review that Maximum Security had drifted out and interfered with several other horses’ progress. Country House, the second-place finisher, was declared the winner.

The owners of Maximum Security filed a lawsuit challenging the decision to disqualify their horse.

A story that broke so late in the year that it wasn’t on the ballot was the slew of last-minute pardons by Bevin before he left office. The hundreds of pardons included one for a convicted killer whose family raised campaign money for Bevin. The controversy looked likely to continue into 2020 as some lawmakers called on federal and state prosecutors to investigate the pardons.

Two stories tied for the year’s No. 4 story: Bevin’s efforts to impose work requirements for some Medicaid recipients and protests in eastern Kentucky by miners who went unpaid for weeks of work.

Bevin’s plan to require some able-bodied adults to work, study or volunteer to receive Medicaid coverage was blocked by a federal judge. Bevin’s administration appealed, but Beshear rescinded the plan once taking office, a move he said ended Kentucky’s involvement in the litigation.

Unrest flared in the eastern Kentucky coalfields when coal company Blackjewel LLC declared bankruptcy and left hundreds of miners unpaid for weeks of work, sparking a two month-long protest in Harlan County. The company eventually agreed to pay about $5.1 million to cover back wages to its Kentucky, Virginia and West Virginia miners.

The fifth-ranked story involved a Catholic school in northern Kentucky that became embroiled in a controversy stemming from a high-profile encounter involving white teens, Native American marchers and a black religious sect outside the Lincoln Memorial in Washington, D.C.

Other top stories included then-Lt. Gov. Jenean Hampton’s legal fight against Bevin over his office’s firing of her top two aides, the special legislative session that resulted in passage of a pension bill aimed at helping regional universities and community social services agencies, the Republican sweep of down-ballot races in the November election and the Tennessee Valley Authority’s decision to close a coal-fired power plant in western Kentucky.

The campaign showdown between Beshear and Bevin dominated headlines throughout the year.

Beshear started his term with calls for civility and bipartisanship to tackle the state’s problems.

Beshear quickly fulfilled campaign pledges by reorganizing the Kentucky Board of Education to reflect his opposition to charter schools, restoring voting rights for more than 140,000 nonviolent felons who completed their sentences and rescinding the Medicaid work requirement. The actions were done through executive orders.

His job is likely to be tougher in 2020, when he tries to push his agenda through a Republican-led legislature with its own priorities in a session that will be dominated by work on a new state budget.