By SUZI BARTHOLOMY
The Messenger-Inquirer 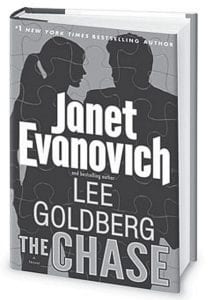 If Owensboro was a wellknown city, such as Los Angeles or Washington, D.C., getting a mention in the novel “The Chase” by Janet Evanovich and Lee Goldberg wouldn’t be of much interest to its residents.

But the Big O isn’t like either of those cities.

Just ask Nicholas Sparks, who called Owensboro “barely a blip on the map” in his latest novel “The Longest Ride.”

Goldberg’s and Evanovich’s collaboration is kinder to the Ohio River town. Since 2008, Goldberg has been a frequent visitor to Owensboro, having been a presenter to all but the first International Mystery Writers Festival that was introduced in 2007 by former RiverPark Center CEO Zev Buffman.

Goldberg is a prolific author who began freelance writing when he was a student at UCLA in the 1980s. He wrote for many publications including American Film, Newsweek, Los Angeles Times Syndicate and The Washington Post.

Goldberg’s credits are vast. He has written episodes for the television series “Monk” and “Diagnosis Murder.” From 2011-13, he wrote 16 books in the “Dead Man” series.

The California author said he is under no illusions regarding the success of “The Chase” and its position on the New York Times bestseller list.

“My (writing) partner Janet has sold 75 million copies” of her work, Goldberg said.

The writers work apart. When Goldberg has written several chapters, he sends them to Evanovich.

“She has the final say,” Goldberg said.

“The Chase” takes readers to Washington, D.C., Shanghai, Scotland, Montreal, Owensboro and Hawesville. The book’s main characters are FBI special agent Kate O’Hare and infamous con artist and art thief Nicolas Fox, who convinced the FBI into hiring him for his expertise. Fox teams up with O’Hare to return an artifact to the Chinese government.

O’Hare and Fox are attracted to each other but haven’t explored their relationship. O’Hare lives by the FBI code of ethics, and Fox has honored her lead. The closest they’ve come to intimacy is when Kate helps herself to Nick’s hamburger.

Goldberg indicated that things might warm up between the couple in the sequels, but she’s still a bythe book FBI agent and he’s still a criminal.

“Chase” is the second novel in a four-book deal Evanovich and Goldberg have with Bantam Books. The first in the series, “The Heist,” is also on the Times’ best-seller list.

“I read both, and they are great,” said Roxie Witt, executive director of the River- Park Center. “They’re highly entertaining. Lee has such a clever wit, in my opinion, and not just in his talking, but his writing as well.

“In ‘ The Chase,’ when they (O’Hare and Fox) go undercover, they use familiar names,” Witt said. The couple have presented themselves as Jim Rockford and Lucy Carmichael, and Jennifer and Jonathon Hart, which are names of television characters of the 1970s and ‘80s.

“ People of a younger generation, not familiar with the names, wouldn’t blink an eye,” Witt said. “It’s really neat to see the region in the book.

“ Lee is really a good friend, and he’s coming back in May. We’re working with the library for an author panel discussion and book signing,” Witt said.

Goldberg not only uses famous names in his books, but also names of friends.

“I’m in one of his books,” Witt said. “It’s kind of a rush opening a book and seeing your name. It’s kinda cool.”

Goldberg said he used the Daviess and Hancock locations because he likes the area.