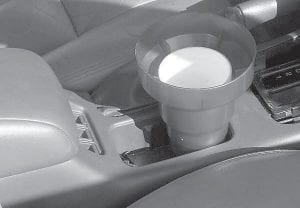 Cupholders are a must. Pictured above is the KAZ-e-KUP, an after market cupholder that is guaranteed by its maker not to spill any drinks.

“My cup runneth over,” says the Bible, expressing the joy of having more than enough. But these days, if you really want your cup to runneth above and beyond, what you needeth is more cup-holders.

Yes, as it turns out, cup-holders are the holy grail of American happiness. (What, you thought it was a healthy relationship and low BMI? Pfft!) While 36 percent of American moms care about the resale value when buying a new car, a new survey by the website BabyCenter discovered, 41 percent said they care MOST about the cup-holders. Why?

Well, first of all, because we have become a generation utterly incapable of going three steps without drinking something. But also because cup-holders seem to hold our nation’s soul.

“I live in Arkansas, and most of my commutes are really no more than 15 or 20 minutes,” says Dana Dussing Berry, a mom of three in Little Rock. “But it is nice to have that in the car with me.” That being a cup of coffee, even if she really is never far from her home or office, where yet more coffee awaits. The idea of down time between those cups feels like a drought.

I’d roll my eyes at her pitiful addiction, except that I have walked in her shoes … generally to Starbucks. There is something about having — owning — a cup of coffee that makes me feel richer than ripping open my monthly paycheck. (Which could say something about the size of the check, but hear me out.) Coffee is the grown-up security blanket: warm, reassuring, confidence-endowing. A cup-holder allows us never to be without that “blanket.” Even climbing back into car and finding a cup gone cold is reassuring: At least it’s THERE, our faithful overpriced friend.

Then, too, there is the wealth that the cup-holder itself represents. One cup-holder means you can only have one cup in your car. It’s like having a one-bedroom apartment. Sharon Corsentino, an attorney in Frisco, Texas, traded up from a Honda to a Mercedes only to realize in her new car, “The cup-holder must’ve been an afterthought because it’s really skinny, and the ‘second’ one is a pop-out thing! The horror!” If one person puts their drink in the pop-out deal, Corsentino continued, “you can barely get the drink out of the other one.” This tawdry state of affairs was so disturbing, she is considering driving a Honda again — for the you-know-whats.

What Corsentino innately understands is that if you’re rolling in cup-holders, you are king of the castle. Lo, there be cup holders on the console, and on the door, in the middle of the back seat and upon the doors back there, too — truly are you living large. The 2008 Honda Odyssey, which supposedly came with 15 cup-holders, was like a mansion coming with 15 bathtubs — all of them Jacuzzis.

And that’s before we even consider that at least as often as the cup-holder holds cups, it holds everything else we long to have at our fingertips: sunglasses, cellphones, pens, pencils, coins, keys, candy and those cleverly packaged Goldfish crackers. So the cup-holder is a storage unit. And when you think about it, both those nooks became ubiquitous over the past generation as our purchases overwhelmed us and we needed a place to put them.

I’m not saying that cup-holders represent everything the modernday American needs to feel fulfi lled, from overpriced coffee, to excess storage, to excess stuff to fill that space and necessitate even MORE space.

Lenore Skenazy is the author of “Free-Range Kids: How to Raise Safe, Self-Reliant Children (Without Going Nuts With Worry),” and, “Who’s the Blonde That Married What’s-His-Name? The Ultimate Tip-of-the-Tongue Test of Everything You Know You Know — But Can’t Remember Right Now.” ©2011 Creators