By KINNEY LITTLEFIELD The Associated Press 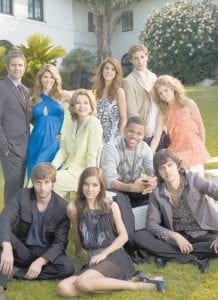 The cast from”90210″, front row from left, Ryan Eggold as Ryan, Jessica Stroup as Silver, Michael Steger as Navid; middle row from left, Jessica Walter as Tabitha, Tristan Wilds as Dixon, AnnaLynne McCord as Naomi; and back row from left, Rob Estes as Harry, Lori Loughlin as Debbie, Shenae Grimes as Annie and Dustin Milligan as Ethan, are shown. The spin-off on the fabled ’90s teen drama premieres Sept. 2 at 8 p.m. on The CW. (AP Photo/The CW, Art Streiber)

“Gutter balls only, please!” someone yells during a rehearsal at the Lucky Strike bowling alley for the CW network’s new series “90210.” So co-stars Jessica Stroup and Shenae Grimes downplay their bowling skills.

The spin-off on the fabled ’90s teen drama premieres Sept. 2 in the United States. If the show mimics the hot bodies, hip fashion and angst-ridden affluence of “Beverly Hills, 90210,” it will also play edgier and less preachy, says co-executive producer Gabe Sachs.

“Look, we’re not stupid,” Sachs says. “We know people are probably expecting a cheese fest and that’s just not what we do.”

Sachs and partner Jeff Judah cut their teeth as producers on the quirky yet short-lived teen series “Freaks and Geeks” and “Life as We Know It.”

“The truth is, Jeff and I write how we write,” Sachs says. “Everything’s got to come out of real emotion. We want to deal with issues and show consequences, but not the issue of the week and pound you over the head.”

“But I can never ever knock the original ‘90210,”‘ Sachs says of the series that ran from 1990- 2000, trading on youth issues from addiction to pregnancy and amping the fortunes of the fledgling Fox network.

But despite her announced participation, Tori Spelling (yet another star in the original series as well as daughter of the late TV mogul) isn’t expected back.

“Earlier in the summer we anticipated that she was going to appear in the show, but those plans were postponed for personal reasons on Ms. Spelling’s behalf,” CW spokesman Paul McGuire said. In June, Spelling gave birth to her second child with husband Dean McDermott.

There currently are no plans for the 35-year-old actress to be part of the new series, according to McGuire and Spelling’s publicist, Meghan Prophet.

Heading into its third season, CW is aiming “90210” straight at its advertiser-coveted target audience, cool-conscious female viewers from 18 to 34 who buzz about CW’s “Gossip Girl.”

Like the original, “90210” is a fish-out-of-water tale about a Midwestern family transplanted to Los Angeles, the land of freeway jams and perpetual tans.

Although the original series’ core family, the Walshes, were from Minnesota, the Wilson clan hails — with shades of Wizard of Ozian irony — from Kansas. Like siblings Brenda and Brandon Walsh (Doherty and Priestley), Annie Wilson (Grimes) and adopted brother Dixon (Tristan Wilds of “The Wire”) are gorgeous, yet more grounded than their classmates at West Beverly Hills High School.

The Wilson parents (Rob Estes and Lori Laughlin) seem hip and handsome in ways the Walsh parents (Carol Potter and James Eckhouse) were not.

“This has the glitz of an Aaron (Spelling) show, but at the same time Gabe and Jeff have taken it and given it a sense of humor — they really flip it on its ear sometimes,” says Estes, who starred on Spelling’s “Melrose Place” from 1993-1999.

“And they’re also like 12- year-olds, you know?” Estes says. “They completely understand the electronic world, like texting.”

The “90210” formula will also include product placement “as long as it doesn’t hit you over the head,” Sachs says. “I think it’s important to show what kids really use.”

“Things can take a turn, and you can get a big head, or get jaded,” says Stroup of the fame game. “The next two weeks, we’re going to be unveiling more and more ads and everybody that we talk to is saying, ‘Get ready, get ready.’ And we’re all like, ‘Where are we going to hide?”‘