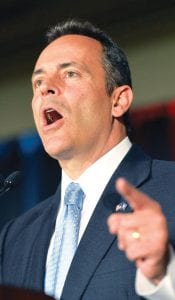 Republican Matt Bevin addressed his supporters at a victory party in Louisville Tuesday after sweeping his way to victory over Democrat challenger Jack Conway. (AP)

Republicans continued their slow takeover of Kentucky politics on Tuesday by electing only the second GOP governor in four decades.

Matt Bevin defeated Democrat Jack Conway with 52 percent of the vote. Independent Drew Curtis was a distant third with just more than 3 percent.

“This is the chance for a fresh start, it truly is, and we really need it,” Bevin told a packed crowd at The Galt House in Louisville. “I believe this offers us an opportunity to change the tenor of what has become expected in the world of politics.”

Focus will almost immediately shift to the state House elections in 2016, where U.S. Sen. Mitch Mc- Connell has vowed to flex his powerful fundraising muscle to help Republicans to take over the only Southern state legislative body still controlled by Democrats. Before leaving the stage, Bevin led the crowd in chanting what is sure to be the rallying cry for Kentucky Republicans in 2016: “Flip the House!”

Bevin cast himself as an outsider, in both government and politics. The 48-year-old investment manager has never held public office. He was shunned by the state’s Republican political establishment when he challenged

McConnell in the 2014 Senate primary. He never took any meaningful steps to repair those relationships after the race, often deflecting assistance from party officials and likely affecting his fundraising ability.

He relied more on the details of his personal story — his Christian faith and his four adopted children from Ethiopia — than his political policies.

“I just like his values,” said Lisa Harris, a 46-yearold manufacturing worker in Georgetown who said she voted for Bevin. “I love the way he has adopted children. He was a serviceman and he’s Christian and he doesn’t care to tell that. I just really like his core value of family and home.”

Bevin’s campaign was mostly self-funded, and he preferred to speak to small gatherings of voters instead of courting influential donors. His running mate, Jenean Hampton, is a retired Air Force officer who moved to Kentucky from Detroit and whose only political experience is a lopsided loss to the former speaker of the Kentucky House of Representatives in 2014. Now, Hampton will become the first black person to ever hold statewide office in Kentucky.

“I have a platform now to talk about, entrepreneurship and education, and being an example to those who don’t believe they can achieve the American dream, because I’m here to say it is possible,” Hampton said.

For Conway, the defeat likely marks the end of a once-promising political career. He already lost a closely-watched race for U.S. Senate in 2010 against another political outsider: Rand Paul, who is now running for president. His campaign against Bevin was much more focused and disciplined, with striking similarities to the campaign McConnell ran against Bevin in 2014.

Conway conceded the race shortly before 9 p.m. at the Frankfort Convention Center, telling the quiet crowd it was not the result he had hoped for, “but it is the result we respect.” He said he called Bevin and wished him well.

“It was a cordial phone call. I told him I remain positive about moving this state forward, and if he ever needed any assistance, this Democrat was at his disposal,” Conway said.

Bevin ran an aggressive campaign, often arguing with reporters and even dropping by the state Democratic Party headquarters, twice, to argue with them about their signs criticizing him as dishonest. But it appeared Bevin was able to tap into voters’ growing frustration with their government to overcome any concerns they may have had about his temperament. He has promised some sweeping changes, most notably repealing the state’s expanded Medicaid program and kynect, the state-run health insurance exchange. Those decisions will affect the health insurance of about a half-million people.

Stanley and Deborah Harp own their own business in Georgetown. They had health insurance, but the type of plan they had vanished after the Affordable Care Act went into effect. They couldn’t afford their new health insurance premiums, but they did qualify for the expanded Medicaid program. Even though they now have free health insurance, they aren’t happy about it. They had to leave the doctor they had been using for 20 years.

“We’ve had the same doctor groups for the past 20 years who have our history, our kids had as pediatricians,” said Deborah Harp, adding that she voted for Bevin.

Bevin has promised to replace the Medicaid expansion with a new program that would most likely require recipients to pay a small premium for their health insurance. Such an arrangement must first be approved by the federal government.