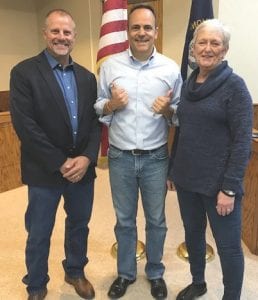 Letcher County will use $320,776 in state discretionary road aid to repair the roads in three hollows that the county did not have money to fix.

The City of Fleming-Neon will get an additional $76,320 to fix three city streets.

Gov. Matt Bevin made the announcement of state money during a campaign swing through eastern Kentucky on Saturday, three weeks before this year’s General Election.

The roads the county submitted for funding and that were approved were:

The work on the roads and streets will be done by the county and the city.

Letcher County had applied for money to repave Fishpond Road, however Bevin said did not meet criteria for the money.

The Letcher District Courtroom was filled to capacity for what had been billed as “a major infrastructure announcement by the governor.” Bevin spent most of the two-hour appearance campaigning, and defending his push to change the state pension system, a signature move that has drawn widespread criticism from teachers and state employees.

Bevin blamed the pension crisis on previous governors, saying, “people kept kicking the can down the road.” He asked for a show of hands from audience members who were in the pension system.

“There’s not one of you who has not known there was a problem with the pension system,” he said.

Bevin claimed to be the only governor ever to have fully funded the state’s pension system, however according to a report from The Courier-Journal in December, the system was fully funded in 2000. That report said state officials struggled to balance the budget after that because of the recession that began after the 9/11 terrorist attacks, and in 2008 the housing bubble burst, sending stocks plummeting and further damaging the pension system.

The report also blamed a $3.8 billion deficit in the fund on cost of living increases approved by the General Assembly in 1996, and a failure by governors and the legislature to heed actuarial warnings that the system needed more money.