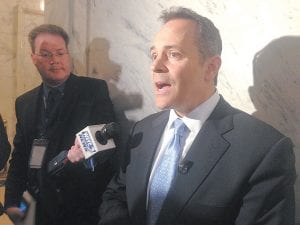 Governor Bevin addresses the media after vetoing the living donor bill which would allow time off work for being a donor.

Gov. Matt Bevin has vetoed a bill that would have allowed Kentuckians to take time off of work to be “living donors” or donate bone marrow without risk of losing jobs or income. The bill would have required paid leave of absence for such reasons, and offset the cost to the employer with tax credits.

“I was deeply disappointed,” Republican Rep. Ron Crimm, sponsor of the bill, said in a telephone interview. “I thought it was a very good bill.”

Crimm, from Louisville, said the Republican governor called him and told him it was a good bill, but that he wasn’t accepting anything that would generate a cost to the state.

Bevin said in his veto message, “House Bill 19 is a noble and well-intentioned piece of legislation designed to encourage the generosity of time and financial resources by both individuals and employers. However, the financial costs and administrative burden on the Department of Revenue to implement House Bill 19 far outweigh the limited benefit this legislation can provide.”

The Legislative Research Commission’s fiscal note on HB 19 says it would cost about $100,000 to set up the system, but future cost would be “minimal.” Crimm said he didn’t think it would cost that much to set it up and that he told the governor so.

HB19 is modeled after a similar program in Pennsylvania, which allowed LRC staff to look at the fiscal impact of its tax credit as a point of comparison. They found that in a four-year period, Pennsylvania had only three taxpayers claiming a donor credit for a total of $3,505.

“Therefore, staff estimates that the revenue impact of the credit permitted by HB 19 would also be minimal,” says the fiscal note. Crimm said, “It’s nothing.”

Tom Loftus of The Courier Journal noted that Crimm faces a “stiff primary election” May 17 against Jason Nemes and that Nemes’s father, Mike Nemes, a former state representative, is Bevin’s deputy labor secretary.

Asked if he thought this might have influenced the governor’s veto, Crimm laughed and said, “If that is true, then I’m very, very disappointed that I supported him.” Then he said, “I don’t think the governor would have done that.” But then he said, using what he said is an old “Pennsylvania

Dutch” expression, “It wonders me. … Everybody, one-hundred-percent of the people in the House and the Senate, voted yea on the bill. The legislation passed 95-0 in the 100-member House and 37-0 in the 38-member Senate.

Kentucky Health News an independent news service of the Institute for Rural Journalism and Community Issues, based in the School of Journalism and Media at the University of Kentucky, with support from the Foundation for a Healthy Kentucky.