Beware! Yards, businesses may be going to the toilet 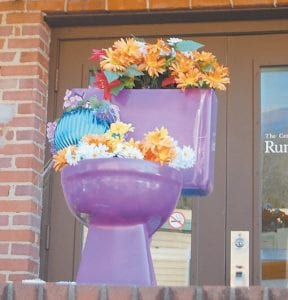 A purple toilet being used to raise funds by a team that will participate in the Relay for Life Walk-a-thon to fight cancer found its way to the front of Whitesburg City Hall recently. (Eagle photo)

If you wake up one morning soon to find a purple toilet in your yard, you’re not just seeing things.

Borrowing from last year’s successful fund-raising effort that featured a purple cow, members of a Letcher County church have been leaving a decorated toilet outside homes and businesses to help raise money for the American Cancer Society’s Relay for Life Walk-a-thon.

“We hope everyone takes it with a light heart and a smile as they fork over $10 to get it out of their yard,” said Katie Dollarhide, a member of the Relay for Life team at the Premium Baptist Church.

Last year, the Letcher County American Cancer Society Relay for Life Committee raised money by placing a purple cow in front of homes and businesses. Residents had to pay $10 to get the cow removed from their yard. Businesses had to pay $20.

Felicia Bates, captain of the Premium Baptist Church team, said the group originally planned to have the toilet pass only from the yards of church members as a way to raise money for the June event. She was surprised when she got a call saying the toilet was sitting in front of the Whitesburg home of Anna Craft, superintendent of Letcher County Schools.

“I sure didn’t realize it would end up in town,” said Bates.

The old commode was spraypainted purple after Johnny Collins of Isom removed it from the home of his mother.

“It’s mounted on a piece of plywood and two people can load it up and haul it around,” said Bates. “It’s made its rounds. It made several stops on Smoot Cr eek.”

Hauling the toilet around the county will allow the church team to raise more money for finding a cure for cancer, said Bates.

“The more money we raise the closer to finding a cure, we hope,” said Bates, whose father, motherin law, nephew and several friends have died from the disease.

Dollarhide said team members hope to avoid having the toilet sit at one place for too long.

“We try to keep it moving,” said Dollarhide. “As long as it is sitting still we ar en’t m aking money.”

This will make the third year that Premium Baptist Church has participated in Relay for Life event. Last year the team raised $4,000 from selling baked goods, dinners and taking donations.

Myrtle the cow will also reappear on the fund-raising circuit next month.

“She will be in circulation May 1 through June 1,” said Alberta Perry, chairperson for the Letcher County Relay for Life committee. “She is going to be new and improved this ye ar.”

Myrtle was originally constructed of two-by-fours, chicken wire, newspaper and tissue paper. After being transported all over the county, the cow started to wear down.

“We’d be going down the four lane and tissue paper would be flying out of her,” said Perry.

This year Perry’s nephews are building a new cow made of plywood. The cow will be attached to a trailer.

Perry said she has had several people ask her if the cow would be back this year.

“It was a hit all over the county,” said Perry. “We made a lot of money on her and had a lot of fun with her.”

Perry estimates that $2,500 was raised with the cow.

“Everybody was talking about that cow,” she said. “It was hilarious.”

The Letcher County Relay for Life event raised nearly $70,000 last year. This year’s walk-a-thon is set for June 5 at River Park in Whitesburg.

Teams of people take turns walking around a track until the event is over the next morning. The event raises money to help fight cancer while raising awareness of cancer prevention.

Perry said Relay for Life committee has a goal of raising a total of $100,000 at this year’s event.