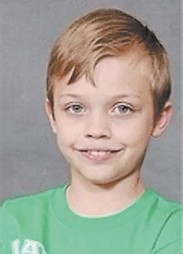 Funeral services were held at Jenkins High School this week for an eight-year-old boy who died last week from head and chest injuries he suffered in a bicycle accident that authorities have called “freak.”

Trenton Paul Carty lost control of his bicycle while riding down a hill on Williams Street in the Mudtown community of Jenkins around 8 p.m. on May 7, said City Police Chief Jim Stephens.

Trent, a son of Mr. and Mrs. Verlin Keith Carty Jr. of Jenkins, was transported to Whitesburg Appalachian Regional Healthcare (ARH) hospital, where he was pronounced dead later that night.

“This is just one of those freak accidents,” said Stephens. “I just want to emphasize that this was an accident. This was a tragedy that no one could have stopped.”

The accident is still under investigation by Jenkins Police Cpl. Josh Richardson.

Stephens, who patrols the Jenkins schools often, said Trent was a great kid who enjoyed joking.

Stephens said Trent was one of the first children who greeted him with a high five, handshake or hug when he entered Burdine Elementary School, where Trent was in third grade.

Trent liked magic and enjoyed showing others magic tricks he had learned.

“He was very polite and a good student,” said Stephens. “I thought he was great.”

Stephens stopped by Burdine Elementary School on May 13 and said it was evident that students miss Trent.

“It’s just one of those things we’ll never understand,” said Stephens. “The kid could have had on a suit of armor and it wouldn’t have mattered.”

Trent is described as an energetic child with a big heart who was loving and protective of his family, especially his sister, Arabella. He enjoyed spending time with family and community members. He liked to swim, hike, play video games, play basketball, attend church, ride all-terrain vehicles and draw.

Trent enjoyed making movies on his laptop and taking pictures with the camer in his iPad.

He had several nicknames from friends and family, but was proud and most noted for “Stripe” from the film Gremlins, which was given by his grandfather.

Friends and family members say Trent had a smile that could light up a room and capture your heart. He had a passion for magic and possessed several magic kits and was very proud of the card tricks that he had recently learned and was able to perform very well.

Trent was preceded in death by his grandfathers, Paul Sanders and Verlin Keith Carty, Sr., and his great-grandfathers, John DePriest, Hubert Carty and Jack Redman.