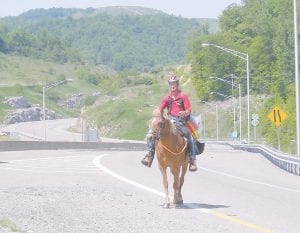 Above, Don Boehly and his 14-year-old horse, Lucky Lady, were photographed Saturday as they were leaving Kentucky and heading into Virginia by way of the Pound Gap of Pine Mountain (U.S. 23). In the photo at left, Boehly is getting instructions on the best way to get to the top of Pine Mountain from Jenkins Police Sgt. Adam Swindell. The photo below shows a badge given to Lucky Lady signifying her as a Junior Jenkins Police Officer. (Photos by Chris Anderson)

Nearly four years after he came through Letcher County near the beginning of a cross-country bicycle tour, 53-year-old Don Boehly was back in the county again on Sunday – this time on horseback.

Boehly, who lives in Grayson, Ky., in Carter County, is attempting to visit each of the 48 contiguous states in the U.S. by horseback to bring attention to soldiers who are killed or injured during war.

Riding aboard 14-year-old Lucky Lady, Boehly successfully made it out of Kentucky on Saturday and into Virginia, where he spent the night in Pound with Police Chief John Stallard before leaving for Wise on Sunday morning.

Boehly, a handyman from Grayson, hopes that in addition to bringing attention to fallen and injured soldiers, his ride on Lucky Lady can also bring focus to the economic hardships that face families that are left behind when soldiers are killed in the line of duty.

On Sept. 1, 2004, Boehly began a cross-country bicycle trip he was making to honor of the police officers and firefighters who lost their lives trying to rescue victims of the Sept. 11, 2001 terrorist attacks on New York City. 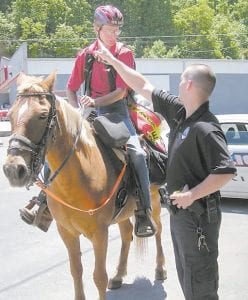 During his trip, Boehly was often provided shelter by fire and police officials in small communities such as Mt. Shasta in northern California, which Boehly reached on March 23, 2005.

Boehly had hoped to end the bicycle tour on Sept. 11, 2007, at the former site of the World Trade Center in New York City. After pedaling a total of 20,944 miles and reaching Bridgeport, Connecticut, Boehly said he was forced to cancel the trip because of medical reasons.

While in Jenkins over the weekend, Boehly spent time talking with Jenkins firefighters and police officers. 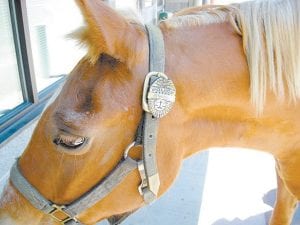