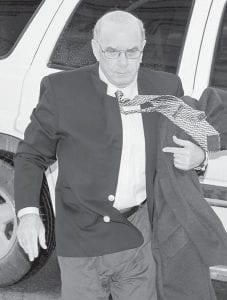 As a federal corruption trial began Tuesday against a former Kentucky Cabinet secretary and an influential road contractor, the prosecutor alleged their “cozy” business relationship broke the law but the defense countered that the two men are victims of overreaching investigators.

Former Transportation Secretary Bill Nighbert and contractor Leonard Lawson stand accused in U.S. District Court in Lexington of swaying some $130 million in state road construction projects to Lawson’s companies between 2006 and 2007. Assistant U.S. Attorney Ken Taylor alleged in his opening statement that Nighbert delivered to his friend insider information unavailable to competing bidders in exchange for kickbacks, including money for a car and a “fake” consulting job.

True argued in opening statements that if there was any criminal activity in the case, it was from Rummage — and he pointed out to the jury that Rummage wasn’t among the defendants standing trial. He said Rummage drummed up false accusations, relying in part on a cache of secret recordings that investigators ultimately took out of context to implicate Lawson and Nighbert and keep himself out of legal jeopardy.

“He was in trouble and he had to get out of trouble, so he gave them Leonard Lawson,” True said.

But Taylor insisted Rummage was merely a pawn in a much larger corruption scheme. At Nighbert’s request, Rummage fetched the engineering estimates and delivered them to Lawson, not suspecting any illegal activity.

Rummage was a wreck, Taylor said, when he started getting rolls of $5,000 in cash from Lawson and finally realized the possible ramifications. That is when he went to federal investigators.

“He couldn’t eat,” Taylor said. “He couldn’t sleep. He was losing weight. He was torn up. He was certain this was going to come out. He didn’t want to be the one still out there when it happened.”

The prosecution argues Lawson wanted the internal engineering estimate as a way of knowing how to maximize the amount his companies could charge the government for road contracts without going so high that the bids would be rejected. True said that makes no sense, considering Lawson won about 100 contracts during the period in question — some higher than the engineer’s estimate, others lower, and many for amounts far higher than the eight being scrutinized at trial.

Discussion about whether jurors should believe Rummage dominated the first morning of the trial. Even U.S. District Judge Karl Forester, who is presiding, has expressed misgivings about his expected testimony, saying at one point his credibility was “severely impaired.”

Acting Transportation Secretary Mike Hancock was the first witness called Tuesday afternoon, and some big name ones could follow, including Gov. Steve Beshear, a Democrat, and Senate President David Williams, a Republican. Forester has set aside three weeks to hear the case.