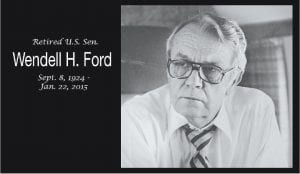 Vice President Joe Biden knew former Kentucky governor and U.S. Sen. Wendell Ford as a trusted adviser and Bill Clinton knew him as the man who first introduced Clinton as President of the United States.

But Leroy Lamar knew him for his love of Coke Classic and peanut butter crackers.

A commercial pilot from Hawesville, Lamar is used to putting up with demanding needs of his clients. But whenever Ford called him for a ride, he was happy with just a Coke and crackers.

“If he had never been senator or governor, he would have been just the same,” he said.

From presidents to pilots, the theme at Ford’s funeral Tuesday in his hometown of Owensboro was his ability to make things happen at the highest levels of government without compromising his love of Kentucky or its people. Biden, who served in the Senate with Ford for 25 years, marveled at how Ford could know a state so well, and how a state could know him even better.

“You knew he knew what your problem was. You knew he knew, and he understood. … He could smell it, taste it, feel it,” Biden said during Ford’s funeral. “Technically, I was senior to Wendell (in the Senate.). … But I was smart enough to know I was junior in every other way.” 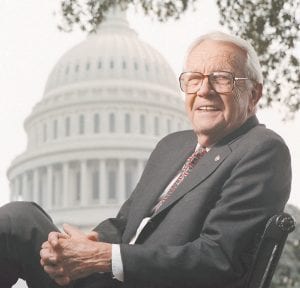 Late U.S. Senator Wendell Ford posed for this photo at the Capitol building in Washington in 1998. (AP photo)

Biden hailed Ford as “the most effective legislative leader I have ever worked with” and said he worked behind the scenes on Biden’s Violence Against Women Act in the mid-1990s. He said it was Ford’s idea to attach the bill to a larger crime bill to ensure it would pass.

Clinton said Ford was in charge of his presidential inauguration, and recalled that Ford’s was the “very first voice I ever heard saying I was president.” Clinton said he remembers every speech Ford gave during his two campaigns for president, where he won Kentucky both times by narrow margins — the last time a Democratic presidential candidate has won Kentucky. 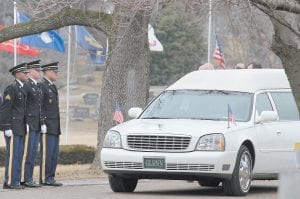 “It is unlikely I would have won had he taken a different view of things,” Clinton said.

And yet, Clinton said he remembered Ford most for his staunch defense of his policies when he believed Clinton was right, and for his stern lectures when he thought Clinton was wrong.

“I had a lot of those (lectures) over the eight years,” Clinton said. “But he knew nobody was right all the time. If he did fail, he would make a deal. We got a lot done in those years.”

Born in 1924 and raised in the tiny community of Yellow Creek, Ford was married for 72 years to his wife, Jean, in what the Rev. Paul Strahan called “a testimony of faith and faithfulness to each other.” He served in the U.S. Army during World War II and in the Army Reserves for several years after that.

His political career began in 1966 when he was elected lieutenant governor as a Democrat and served under Republican Gov. Louie Nunn. Ford won the governor’s office four years later after defeating his mentor, former Gov. Bert T. Combs, in the Democratic primary and former Gov. Happy Chandler in the general election.

Ford served as governor for three years. He eliminated the sales tax on groceries and replaced it with a severance tax on coal, before ousting incumbent Republican U.S. Sen. Marlow Cook in 1974. Known nationally for his six years as chief fundraiser for the Senate Democrats, he remained politically active well after his retirement from public life, appearing in a TV ad for Democratic Senate candidate Alison Lundergan Grimes last year.

But on Tuesday, mourners clung to their personal memories of Ford as a man who took the time to chat with them about their lives and never forgot his hometown.

“He never did quit being that boy from Yellow Creek,” said Terry Birdwhistell, dean of the University of Kentucky libraries and former co-director of the Wendell H. Ford Public Policy Research Center.